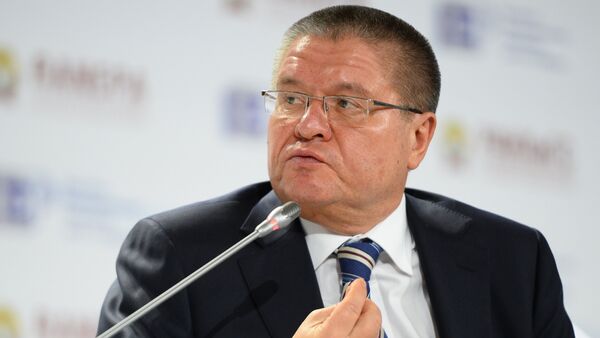 © Sputnik / Vladimir Astapkovich
/
Go to the mediabank
Subscribe
International
India
Africa
Russian Economic Development Minister Alexei Ulyukayev said that the new economic reality and the global economy will not be the same as it was between 2000 and 2007.

Ulyukayev noted these same words were written by Vladimir Lenin 100 years ago.

Russia Could Make Windfall Selling Currency Reserves as Ruble Undervalued
"I think the situation [now] is extremely similar to the situation [back then]. A much more irregular, conflictive, and unforeseeable period has actually come upon us, therefore our measures must be just as competent when [the price of] oil is at $130 [per barrel] as when it's at $30," the finance minister said.

Russia is currently facing an economic slowdown. In the wake of a steep slide in oil prices and geopolitical tensions related to the crisis in Ukraine the Russian ruble has plummeted dramatically, hitting historic lows against the dollar and the euro.

In December 2014, the Russian Central Bank head stated that the inflation rate was expected to remain at 10 percent for the first quarter of 2015.

In December, Russian President Vladimir Putin said that the country's economy will overcome the current downturn in the coming years, adding that the rebound could take place as early as the first quarter of 2015.

Negative Ratings Unlikely to Have Serious Macroeconomic Effects for Russia

Fitch’s Downgrade of Russian Rating to BBB- to Have Little Impact:RusRating
Negative assessments by foreign rating agencies will not have any serious macroeconomic consequences for Russia, the country's Economic Development Minister, Alexei Ulyukayev, said Wednesday.

“At least for our domestic tasks, and more exactly for appraising the situation of our banks, the quality of their stakes, the quality of borrowers, and the release of bonded loans, we don’t need to use these mechanisms, we have our own national rating agencies, we have very highly qualified analytical services in the Bank of Russia, in the Russian government, and in the banking system, so we can easily get along without these [foreign] indicators,” Ulyukayev said on Rossiya-24 television.

“Under current [Western] sanctions our borrowers don’t have the ability to borrow or refinance their loans so the actions of the rating agencies won’t have a material-like character, that is there will be some unpleasant noise, but it won’t lead to any sort of serious macroeconomic consequences,” Ulyukayev said.

In December, Standard & Poor’s, another major credit rating agency, also announced that it is likely to downgrade Russia’s sovereign debt status from its current BBB- rating because of the country’s weakening economy.

A number of lawmakers, including Federation Council economic policy committee deputy head Sergei Shatirov, have referred to the downgrade of Russia by rating agencies as biased and politically motivated. The lawmakers believe that Russia's economy remains balanced and stable due to its “very powerful” reserves.

Ruble More Likely to Strengthen Than Weaken in 2015

"Our national currency has a floating exchange rate so the possibility of moving toward a stronger or weaker point is existent. In my opinion, movement toward a strengthening is more likely because the ruble is currently undervalued. But this is just the influence of market influences that we can only partially forecast," Ulyukayev told journalists.

Russia
Russian Budget Deficit to Be 2%-3% in 2015: Finance Minister
Ulyukayev refused to make a ruble forecast for 2015.

Russia's economy is currently under strain due to geopolitical tensions and Western sanctions imposed over the Ukrainian crisis. A sharp decline in oil prices is another contributing factor to the country's economic slowdown, dragging down the ruble in recent months, which has hit historic lows. The Russian Central Bank expects the country's inflation rate to be 10 percent for the first quarter of 2015.

In December, President Vladimir Putin stated that Russian economy will overcome the current slump, adding that it could rebound as early as the first quarter of 2015.