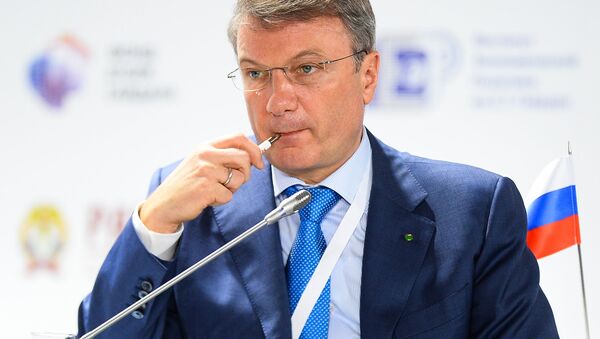 Russian Sberbank president and former Economic Minister German Gref stressed that oil prices will not remain at the $40-mark or lower per barrel.

Prices of WTI, Brent Crude Fall to Lowest Since 2009: Reports
MOSCOW, January 14 (Sputnik) – World oil prices of $40 per barrel will not continue for much longer but but are anticipated to hover between $60-$70 over the next few years, Russian Sberbank president and former Economic Minister German Gref said Wednesday.

"Will the price of oil continue to be low for the year? I think it will, and I'm sure that it won't remain at the $40-mark or lower, but will remain at the level of $60-$70 for the next several years," Gref said during the Gaidar Economic Forum in Moscow.

Sberbank Began Financing Letters of Credit in Chinese Yuan
According to Gref, it would be wrong to wait for a price rebound. "There are many who are willing to predict now that there will be a rebound. It won't be good, it definitely won't be as good as it was before," Gref said.

Since June 2014, oil prices have fallen by more than 40 percent, and currently float under $46 a barrel. Organization of Petroleum Exporting Countries (OPEC) decided not to change its oil output levels, causing a further price decrease in November.

Russia will not be able to avoid a large-scale banking crisis if the price of oil remains at $45 per barrel, Sberbank president German Gref said Wednesday.

Era of Russian Smooth Economic Development Has Reached Its Lowest Point
“It’s already obvious that there will be a wide-scale bank crisis if the average [oil] price remains at $43-$45 [per barrel],” the head of the Russian bank told journalists at the Gaidar Economic Forum in Moscow.

Russia is currently facing an economic slowdown due to a steep decline in oil prices caused by an oversupply in the energy market. On Tuesday, the prices of West Texas Intermediate (WTI), the US oil benchmark, and Brent crude, the global oil benchmark, hit record lows not seen since April 2009, declining to $45 and $44.79 per barrel respectively.

According to a forecast by US investment bank Goldman Sachs, the price of WTI could slide to $39 per barrel over the next six months and the price of Brent may fall to $43 over the same period of time.