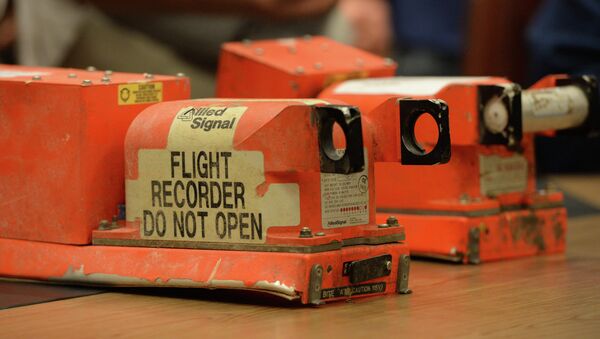 © Sputnik / Mikhail Voskresensky
/
Go to the photo bank
Subscribe
The aircraft maker plans to install ejectable black boxes first on its long-haul A350 and A380 planes because they are used in flights over oceans.

MOSCOW, January 13 (Sputnik) — Airbus will equip its long-haul A350 and A380 passenger aircraft with ejectable flight data recorders that can float, making them easier to find at a plane crash site at sea, AFP reported Monday citing aviation sources.

"At the end of last year Airbus got the green light from EASA (European Air Security Agency) to work on the necessary modifications to its planes in order to install these new black boxes in the rear of the planes," one of the sources told AFP.

An EASA spokesman confirmed that the agency was working on changing the certification to allow Airbus to equip its planes with the new black boxes.

“The idea is to modify the black boxes so that each one records the flight details and (cockpit) conversations. One would be ejectable, the other not," a source close to Airbus explained to AFP.

Second Black Box From Crashed AirAsia Plane Retrieved: Reports
The technology was initially approved for military aircraft, but has never been used in civil aviation because up until a few years ago most of air accidents have happened during take-off or landing. Traditional recorders can be easily found on the ground.

However, in recent years the number of plane crashes over the ocean has risen, so the need for a new technology for flight data recorders has emerged.

An ejectable black box would be equipped with an airbag system so it would be able to float on the surface of the water if a plane crashes into the ocean. It would also help to indicate the exact point of the impact at the time of the crash and to find the wreckage.

The aircraft maker plans to install the ejectable black boxes first on its long-haul A350 and A380 planes because they are used in flights over oceans.

Air crash investigations can be conducted without these recorders, because the devices provide information on how the planes were operating and the conversations of the pilots. They help find causes of 90 percent of crashes, according to investigators.

The International Civil Aviation Organization (ICAO) is expected to vote next month on a recommendation of one its working group to equip commercial aircraft with the ejectable flight data recorders.

"We will certainly be supportive of its efforts to improve the ability of its aircraft to be located in distress situations» as long as the new systems meet or exceed its standards," ICAO spokesman Anthony Philbin said as quoted by AFP. 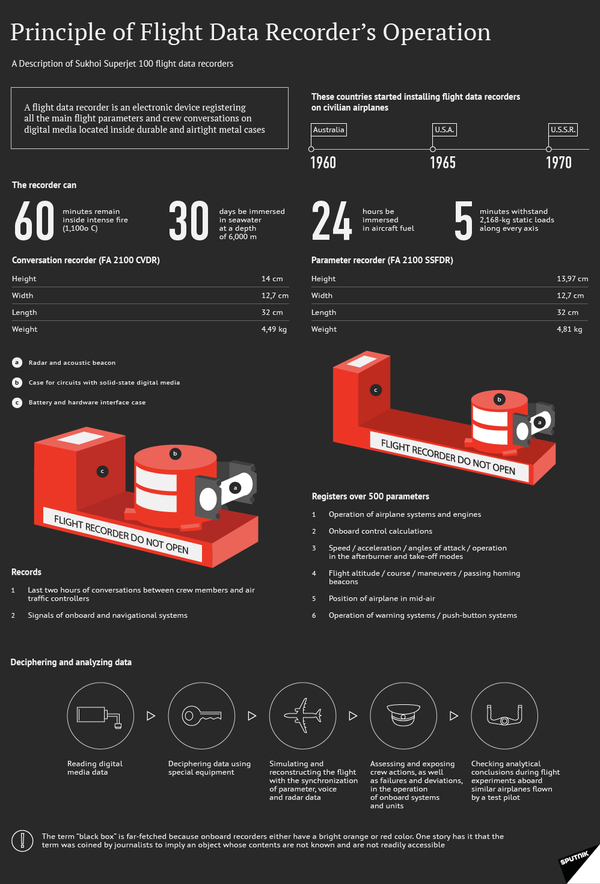 Principle of Flight Data Recorder's Operation
© Sputnik
Newsfeed
0
New firstOld first
loader
LIVE
Заголовок открываемого материала
Access to the chat has been blocked for violating the rules . You will be able to participate again through:∞. If you do not agree with the blocking, please use the feedback form
The discussion is closed. You can participate in the discussion within 24 hours after the publication of the article.
To participate in the discussion
log in or register
loader
Chats
Заголовок открываемого материала
Worldwide
InternationalEnglishEnglishMundoEspañolSpanish
Europe
DeutschlandDeutschGermanFranceFrançaisFrenchΕλλάδαΕλληνικάGreekItaliaItalianoItalianČeská republikaČeštinaCzechPolskaPolskiPolishСрбиjаСрпскиSerbianLatvijaLatviešuLatvianLietuvaLietuviųLithuanianMoldovaMoldoveneascăMoldavianБеларусьБеларускiBelarusian
Transcaucasia
ԱրմենիաՀայերենArmenianАҧсныАҧсышәалаAbkhazХуссар ИрыстонИронауОssetianსაქართველოქართულიGeorgianAzərbaycanАzərbaycancaAzerbaijani
Middle East
Sputnik عربيArabicArabicTürkiyeTürkçeTurkishSputnik ایرانPersianPersianSputnik افغانستانDariDari
Central Asia
ҚазақстанҚазақ тіліKazakhКыргызстанКыргызчаKyrgyzOʻzbekistonЎзбекчаUzbekТоҷикистонТоҷикӣTajik
East & Southeast Asia
Việt NamTiếng ViệtVietnamese日本日本語Japanese中国中文Chinese
South America
BrasilPortuguêsPortuguese