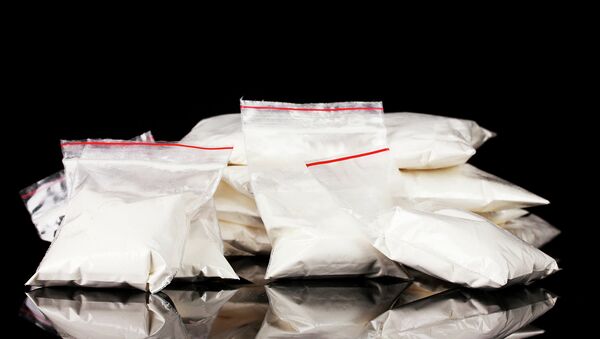 © Fotolia / Africa Studio
Subscribe
International
India
Africa
While recreational marijuana legalization in the US has dealt a severe blow to Mexican cannabis traffickers, the North American market is being flooded with cheap Mexican heroin and methamphetamine, triggering growing concerns among US officials.

Denver's Marijuana Proves Magnet for Homeless
MOSCOW, January 13 (Sputnik), Ekaterina Blinova – In the light of the recent marijuana legalization trend, the US market has been flooded with cheap Mexican heroin and methamphetamine.

"Legalization of marijuana for recreational use has given US consumers access to high-quality marijuana, with genetically improved strains, grown in greenhouses. That's why the Mexican cartels are switching to heroin and meth," explained Raul Benitez-Manaut, a drug-war expert at Mexico's National Autonomous University, as quoted by the Washington Post.

Since Mexican cannabis has evidently lost its market share in the United States, Sierra Madre's drug farmers focused on growing more opium poppies.
In his article "Losing marijuana business, Mexican cartels push heroin and meth," the Washington Post's Nick Miroff points out that the US police officers confiscated 2,181 kilograms of Mexican heroin in 2014 – three times the amount of that intercepted by law enforcers in 2009.

World
US Steering Latin America to Legalize Marijuana: Russia Politician
Meanwhile, methamphetamine seizures at the US-Mexican border also broke records in 2014, reaching 15,803 kilograms (a tremendous rise, compared to 3,076 kilos in 2009). It should be noted that the figure accounts for more than 60 percent of the synthetic drug confiscated in the country, U-T San Diego notes. With a US crackdown on meth, the production of the synthetic drug shifted to Mexico. Citing Drug Enforcement Administration (DEA) data, the media outlet reveals, that almost 90 percent of the methamphetamine sold in the United States is "cooked" in Mexico.

"Heroin and meth are far easier to transport and conceal than marijuana," Nick Miroff explains, adding that a growing number of border-crossing pedestrians which carry the drugs hidden under their clothes or in "body cavities" triggers deep concerns among the US officials.

The Washington Post notes that the Mexican Sinaloa drug cartel remains the dominant criminal power along Mexico's Pacific Coast, controlling the territories from Ciudad Juarez to Tijuana, despite the fact its leader Joaquin "El Chapo" Guzman was arrested by police in February 2014.

Heroin Death Toll Spikes in NYC as User Demographics Change
Quoted by the media source, Rusty Payne, a DEA spokesperson, emphasizes that currently the United States has about 600,000 heroin users, "a threefold increase in the past five years." Unfortunately, the actual number of drug addicts is much higher: an estimated 10 million Americans, who abuse prescription painkillers, have become the main target of heroin dealers.

"Now, we're seeing housewives coming in who had been addicted to Vicodin for two or three years before switching to heroin, or adolescents who got hooked by snorting it, thinking it was safe, only to end up injecting themselves," stressed Phil Herschman, chief clinical officer with the CRC Health Group, as cited by the Washington Post.