US Closure of Military Bases in Europe Unaffected by Paris Attack:Spokesman 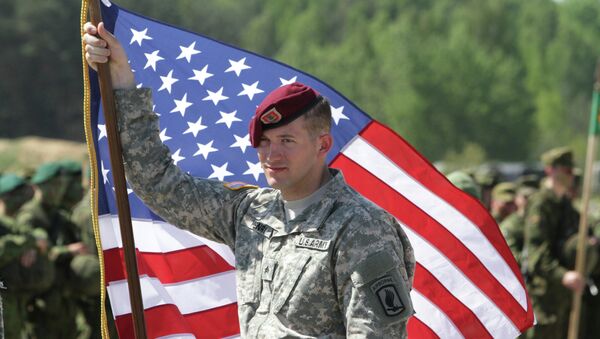 © AFP 2022 / PETRAS MALUKAS
Subscribe
DOD press spokeswoman Lieutenant Colonel Vanessa Hillman reported Monday that the US Department of Defense (DOD) plans on reducing excess US military infrastructure in Europe and related costs would not be adjusted due to the attack in Paris.

“EUCOM FP [European Command Force Protection] measures have not been adjusted due to the attack in Paris,” Hillman stated, adding that the recent attacks are “not projected to affect the EIC [European Infrastructure Consolidation] process.”

The EIC review, released on January 8, was focused on reducing excess US military infrastructure in Europe and related costs, according to Secretary of Defense Chuck Hagel. The United States plans to close, repatriate, or streamline up to 24 US military sites in Germany, the United Kingdom, Spain, and Belgium under the EIC recommendations.

US Naval Expansion in Spain to Protect Europe From Iran: DoD
Over the recent several months US forces in Europe have been operating at a “heightened force posture,” Hillman said.

“The EIC adjustments will not diminish US capability in Europe, nor our ability to meet commitments to allies and partners,” she told Sputnik, though on Thursday the DOD reported a planned reduction of 2,000 US military and civilian personnel in the UK.

Eliminating excess US military infrastructure in Europe is expected to save the United States nearly half a billion dollars annually, according to the DOD reports. Those savings will allow the US to refocus its resources and improve the position of the US “to address emerging concerns in Europe and elsewhere,” Hillman stated.

The shuttering of US military infrastructure in Europe is related to a difficult budget climate, EUCOM commander Philip Breedlove admitted in a press-release published last week. In the coming period under the European Reassurance Initiative, the US will commit forces to engage in rotational deployments throughout eastern Europe, facilitate training exercises with other NATO allies, and build the capacity of newer, unofficial NATO allies including Ukraine, Georgia and Moldova, according to a EUCOM press release.