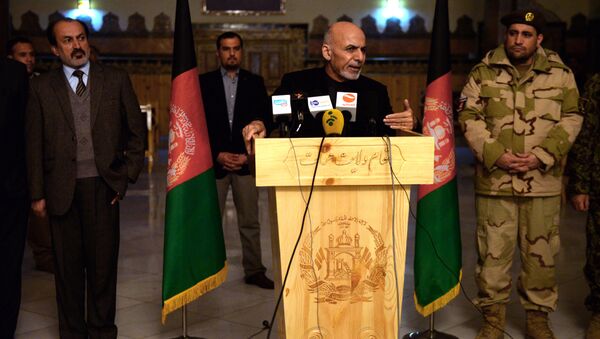 MOSCOW, January 12 (Sputnik) – Afghan President Ashraf Ghani unveiled the make-up of his new government after months of wrangling amid growing concerns of the Taliban insurgency in the country, Reuters reports.

Taliban's Former Leaders Decline Posts Offered in New Afghan Government
Abdul Salam Rahimi, Ghani’s chief of staff, read out the names of 25 people nominated for ministerial posts in a ceremony held in the capital city of Kabul. "The government will refer them to the parliament for a vote of confidence," he added, as quoted by Reuters. The official did not specify when the voting will take place.

Government institutions in Afghanistan have been paralyzed for months after both presidential candidates, Ashraf Ghani and Abdullah Abdullah, claimed they had won the presidential election, marred by fraud allegations. In late September 2014, Ghani was sworn in as president after the rivals reached a US-brokered power-sharing deal.

The new cabinet consists of ministers chosen by both, Ghani and Abdullah, who now serves as chief executive officer in the government. The position, roughly equal to a prime minister according to the New York Times, was created under the national unity agreement last September.

Ghani and Abdullah managed to nominate people seen as close to them to key positions in the government. Nominees for the Defense Ministry and the Finance Ministry, Sher Mohammad Karimi and Ghulam Jilani Popal respectively, are believed to support the incumbent president, according to Reuters. Candidates for the position of interior minister and foreign minister, Noorul Haq Ulumi and Salahuddin Rabbani, are associated with Abdullah.

Afghan President Says US Should Reexamine Troop Withdrawal Deadline
"There are a lot of new and less experienced faces who could be tested soon," Haroon Mir told AFP. "Some names you can say are there because they actively supported one side in the election campaign," the political analyst from Kabul added.

"Today's move will calm people who have been waiting for a long time to see the new government, but it takes time to see if they are a better, less corrupt cabinet," Haroon Mir said as quoted by the news agency.

The US Embassy in Kabul said it welcomed the announcement. "The United States looks forward to continued close cooperation with the government of Afghanistan in our shared pursuit of security, peace and prosperity for the people of Afghanistan," the US Embassy said in a statement.

On December 31, NATO ended its International Security Assistance Force mission in the country (ISAF), created in the aftermath of the 9/11 terrorist attacks in the US to tackle insurgency in Afghanistan. It was replaced with Resolute Support, a non-combat NATO-led mission, which is tasked with training and mentoring Afghan National Security Forces (ANSF). Approximately 13,500 NATO soldiers, mostly from the US, will remain in the country.