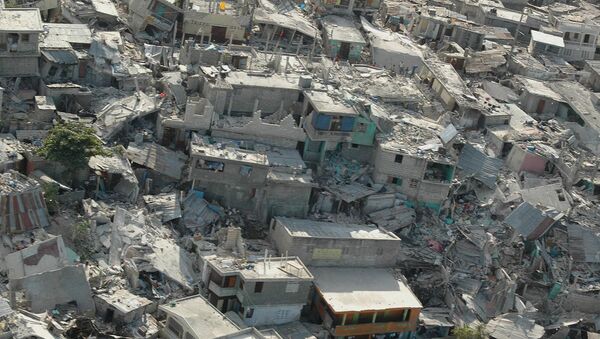 © AP Photo / American Red Cross
Subscribe
UN Secretary General Ban Ki-moon urged the international community to continue its invaluable support for the benefit and future of Haitians, who suffered from the devastating earthquake of 2010.

"Last year, I returned to Haiti and saw the progress that has been achieved. I commend the Haitian people for their perseverance and I urge the international community to continue its invaluable support for the benefit and future of all Haitians," Ban said.

UN chief noted that he unveiled a memorial to his UN colleagues, who have died in the earthquake, adding the he is "eternally grateful for their sacrifices."

Pressure Groups Say Global Community Fails Haiti 5 Years After Killer Quake
Ban stressed that there is still much work to be done to ensure "political and institutional stability, democratic governance and sustainable development" in Haiti.

In 2010, Haiti was hit by a devastating earthquake, which resulted in over 200,000 deaths and injured more than 300,000. The situation was worsened by tropical storms, and consequently by a cholera epidemic, which continues to this day. Although the international community was at first vigorously involved in the relief process, Amnesty International said that the world's interest has waned and donations have become scarce.

More than 8,000 people have died of cholera since the earthquake, which the UN is being sued for allegedly having brought to the island through a peacekeeping contingent from a cholera hot-spot in Nepal, and negligent sanitation practices. One case has been dismissed, but others remain pending.