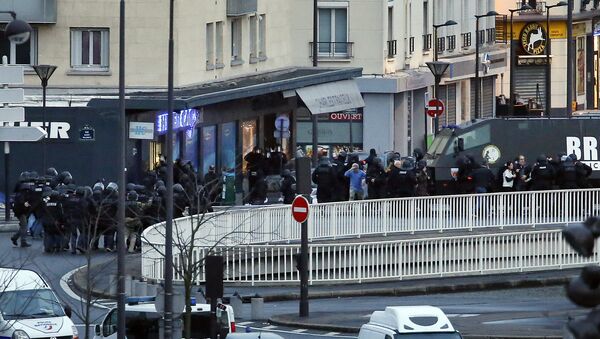 © AFP 2023 / THOMAS SAMSON
Subscribe
International
India
Africa
A girlfriend of a gunman, who fatally shot a female police officer on the outskirts of Paris and four hostages at a kosher shop, crossed the border to Syria on January 8.

French Police Hunt Female Accomplice of Kosher Store Hostage Taker
MOSCOW, January 10 (Sputnik) — Hayat Boumeddiene, a girlfriend of the gunman who fatally shot a female police officer in the Paris suburb of Montrouge and four hostages at a kosher shop in the French capital, has traveled to Syria, the French RTL radio station reported Saturday.

Boumeddiene, who is wanted in France for allegedly aiding her boyfriend, crossed the border to Syria on January 8, the radio station said. According to RTL, it is unlikely that the 26-year-old woman participated in the attacks, as she had booked a ticket for a Madrid-Istanbul flight on January 2.

The French authorities described Hayat Boumeddiene, believed to be Coulibaly’s girlfriend, as "armed and dangerous", according to AFP.

On Thursday, a female police officer was killed near Paris in an attack reportedly linked to that at the Charlie Hebdo office the previous day, when 12 people were fatally shot.

Coulibaly met Cherif Kouachi in jail in 2005, according to the International Business Times. In 2013, the former was sentenced to five years in prison for a failed attempt to help Smain Ait Ali Belkacem, an Algerian Islamist, escape from prison. However, he was released early. Boumeddienne and Coulibaly were married in a religious ceremony, though the couple was not officially registered.