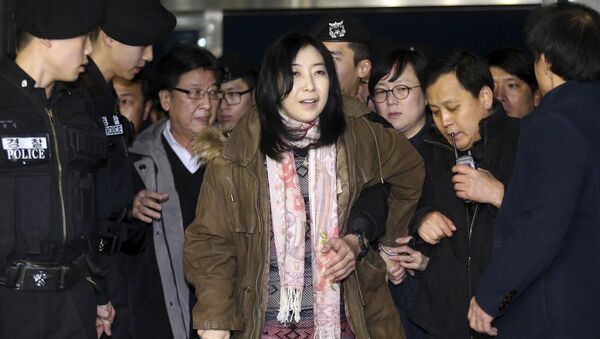 Yonhap added that the woman could be banned from entering South Korea for the next five years. Shin Eun-mi, a California resident has already fled the country to the United States. Before the departure from Seoul, Shin said he had no intentions to praise North Korea's regime, adding that she was just expressing her views regarding her travels to the state.

Asia
New N Korean Military Plan Envisages Occupying S Korea Within Seven Days
The Guardian narrates that Shin Eun-mi published stories describing her journey to North Korea on OhmyNews, South Korea's popular news media site. Although her travel notes were initially included in a "government designated reading list" in 2013, the Culture Ministry has already banned her books, saying it would retrieve all copies from South Korea's libraries across the state.

During her lectures in November, 2014 the woman told a Seoul audience that many North Koreans who fled their homeland to South Korea wanted to return to their fatherland and expressed hopes Kim Jong Un would carry out positive changes in the country. The woman also made noting regarding the cleanliness of North Korea's rivers and good taste of its beer.

Critics have already blasted South Korea's government for the blatant violation against  freedom of speech and expression.

World
North, South Korea Talks Canceled Over Diplomatic Flap
"The decision to deport her is a clear violation of human rights. The government is taking the lead in trampling on human rights," the Hankyoreh newspaper noted as quoted by the Guardian.

United Nations' spokesperson Farhan Haq stated that "The secretary-general’s position on freedom of expression and freedom of opinion is well known…. That would apply here as well."

It is worth mentioning that South Korea's National Security Law prohibits any pro-North Korean activities since the two countries still remain "technically" in a state of war.