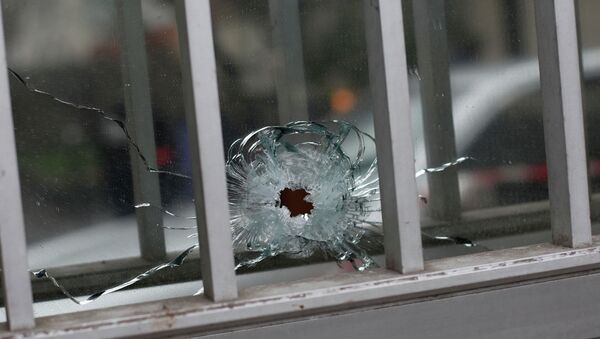 © AP Photo / Thibault Camus
Subscribe
Experts of the European Council on Foreign Relations stated that the attack on the Paris offices of the satirical French weekly magazine Charlie Hebdo is a consequence of an "us versus them" mentality currently dominating the policy toward Muslims and the Middle East by the EU.

Paris Terror Attack an Attempt to Escalate Islamophobia: Minister
MOSCOW, January 9 (Sputnik), Svetlana Alexandrova – The attack on the Paris offices of the satirical French weekly magazine Charlie Hebdo is a consequence of an "us versus them" mentality currently dominating the policy toward Muslims and the Middle East by the European Union, state experts of the European Council on Foreign Relations told Sputnik.

"The attack in Paris is a reaction on things that were and are happening in terms of the European policy and the European attitude towards Muslims and the region," Hugh Lovatt, a Middle East policy fellow with the European Council on Foreign Relations, told Sputnik on Thursday.

Lovatt stated that the western policy of using the military to defend against radicalization in the Middle East has been discredited by the continued activities by radical fundamentalist groups as well as the attempt to establish an Islamic State by religious extremists.

"The western policy is very good at killing the terrorists but not doing well at eradicating the roots responsible for violence in the Middle East," the scholar said, adding that "Europe needs to deal with the crucial social-economic disparity that exists in the region."

Lovatt suggested that current EU policy toward Muslims in Europe has contributed to the sense that they are citizens in name only.

"What we see is a reaction of the Muslim community in the European countries that feels alienated from the rest of the society," Lovatt said, stressing that European Muslims have become easy prey for radicalization. To make things more acute, the isolation of these communities obscures their inner workings, allowing extremists to operate under the radar.

Susi Dennison, a senior policy fellow with the European Council on Foreign Relations, told Sputnik there is an undoubtable link between the Charlie Hebdo massacre and the strong anti-Islam rhetoric heard in many European countries.

"We all can feel growing tension and concerns over the rise of the extremist Islam in Europe. The support of the far-right parties is clearly the response to the Islamic radicalization," Dennison said, stressing that voters’ fear of radical Islamists played a major role in the success of several far-right parties in the European Parliament elections in May 2014.

But there is a ray of light in the tragedy. The horror engendered by the recent killings in Paris has caused an outpouring of grief, much of it in the form of calls for solidarity and calm.

Dennison observed that EU and French reaction following the attack shows an even greater determination to protect the principles of freedom that the content of the Charlie Hebdo magazine, at least in part, represents.

Echoing Dennison’s sentiment, Lovatt pointed out the spirit of unity that has been on display in France over the past 48 hours.

"Instead of being driven apart or blaming 'the other,' for now at least, people have come together in rejection of the extremism and intolerance," he said, adding that instead of retweeting the most offensive Charlie Hebdo cartoons, many users have opted to retweet cartoons lampooning the militants themselves.

"This shows a belated acknowledgment that freedom of speech, while absolute, does come with responsibilities," Lovatt stated.

The latest issue of Charlie Hebdo featured a review of Michel Houellebecq's new book imagining the Islamization of France under a fictitious Muslim ruler who imposes Sharia law over the country in 2022.

"Given that Muslims will constitute only about 10 percent of France's population in 2030 [currently they account for 7.5 percent], much of this seems misplaced, to say the least," the expert said. He added that Houellebecq's talents would be better used if the author decided to depict France ruled by the Front National, a far-right party which has been polled to win as much as 25 percent of the vote during the next presidential elections.

Prior to the attack, the Charlie Hebdo magazine received threats from radical Islamists over the publication of caricatures of the Prophet Muhammad. Hours before two gunmen, suspected to be Islamic extremists, killed 12 and injured 11 in the magazine's office on Wednesday, Charlie Hebdo posted a cartoon on Twitter depicting the leader of the Islamic State militant group, Abu Bakr Baghdadi.