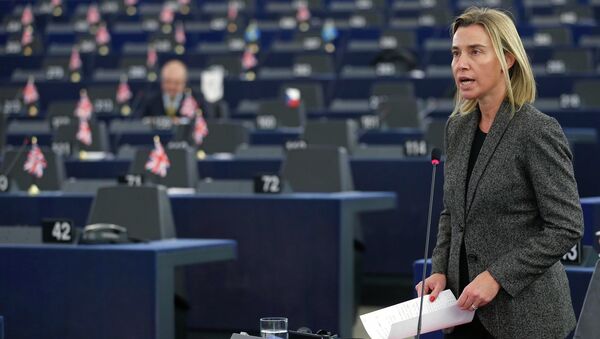 © REUTERS / Vincent Kessler
Subscribe
International
India
Africa
EU foreign policy chief Federica Mogherini said that sanctions against Russia will be lifted, after all points of the Minsk agreements on ceasefire in Ukraine are fully observed.

“What I can for sure say — as it has always been the case — is that it will depend on the situation on the ground. If, and when, all Minsk points would be delivered, then for sure we won’t have sanctions any more. But we are far from that,” Mogherini told the press.

Mogherini noted there have been positive signals demonstrating a slight shift in Moscow’s approach to the Ukrainian situation. However, the EU foreign policy chief said the developments were very limited.

Russia has seen several rounds of sanctions imposed by the West, based on accusations of Moscow meddling in the Ukrainian crisis. In particular, the restrictions targeted Russia’s banking, energy and defense sectors, hampering the country's cooperation with the West.

In September 2014, the warring parties in eastern Ukraine agreed a ceasefire deal in Minsk, brokered by Russia and the Organization for Security and Co-operation in Europe (OSCE). Despite the signing of the agreement, Kiev forces and independence supporters have since accused each other of multiple episodes of breaking the truce.