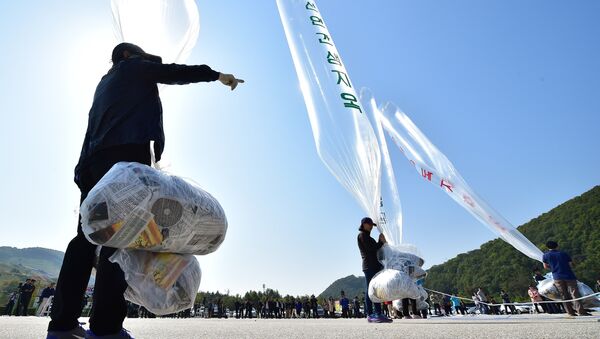 © AFP 2022 / JUNG YEON-JE
Subscribe
North Korea's state news agency warns of a "catastrophic phase" in relations between DPRK and South Korea commenting on a recent launch of balloons carrying leaflets across the border to the country.

MOSCOW, January 7 (Sputnik) — North Korea's state news agency slammed South Korea on Wednesday over a recent launch of balloons carrying leaflets across the border to DPRK, warning that such acts could bring relations between the two countries to a "catastrophic phase".

North Korea's Missiles Able to Reach US Mainland: South Korea
"As already declared, the DPRK will never pardon any reckless act of insulting its social system, the life and soul and dignity of its people," the Korean Central News Agency (KCNA) wrote.

On Monday, a group of North Korean defectors launched balloons containing some 600,000 anti-Pyongyang leaflets over the border from Yeoncheon County in South Korea.

"This confrontation operation was not conducted by some human scum only but the U.S. and the right-wing conservative forces of South Korea were behind them," the agency said, adding that "it is a well-known fact that the U.S. has funded the human scum, who fled their homes after committing all sorts of crimes, to conduct anti-DPRK leaflet scattering operations.".

According to KCNA, this "reckless act" was done at a time when Koreans everywhere were hoping for mended north-south relations in the light of the "patriotic New Year address of supreme leader Kim Jong Un."

South Korea Rules Out Co-Hosting 2018 Olympics With North Korea
The leaflets greatly undermine progress on improving relations between the Koreas, the agency said, calling on South Korean authorities to clarify their stance on north-south relations.

Seoul must now decide "whether they will push the relations again to a catastrophic phase by conniving at the reckless acts of a handful of those who are more dead than alive or come out with sincerity for their improvement and dialogue," KCNA concluded.

In October 2014, a similar incident involving leaflets sent from South Korea disrupted talks between the countries and sparked an exchange of gunfire at the border. North and South Korea are still formally at war, as no peace treaty was ever signed after the Korean War of 1950-1953.