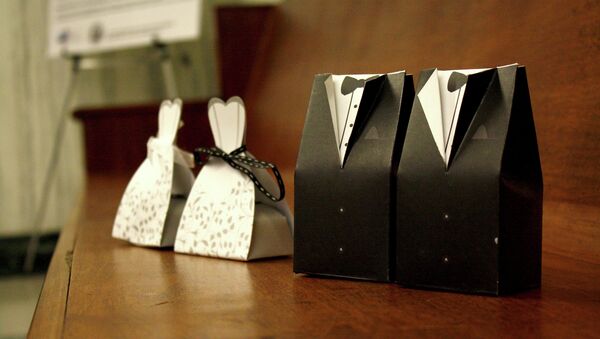 © Flickr / Andrea Parrish
Subscribe
Florida has lifted its ban on same-sex marriage, triggering euphoria among gay marriage proponents across the state. However, Florida's northern counties have already expressed their disapproval regarding gay weddings.

US to Ease Lifetime Ban on Blood Donations From Gay Men
MOSCOW, January 6 (Sputnik), Ekaterina Blinova — As Florida's ban on same-sex marriage ended on Monday, gay couples have rushed to perform their wedding ceremonies across the state.

"Florida's ban on same-sex marriage ended statewide at the stroke of midnight Monday, and court clerks in some counties wasted no time, issuing marriage licenses and performing weddings for same-sex couples in the early morning hours," the Associated Press reported.

Thus far, gay marriage has already been legalized in 36 states including Florida; these states account for more than 70 percent of the US population, according to the Williams Institute at the UCLA School of Law.

Gay Marriage Rights to Extend to 35 US States

On Friday, January 9, the US Supreme Court will hold a private meeting in order to consider "whether to act on cases that could provide a nationwide answer on whether same-sex marriages must be allowed," the Washington Post points out, adding that on the same day a federal appeals court will make a decision regarding same-sex marriage bans in Texas, Mississippi and Louisiana.

"It's an incredible confluence of events. It's the culmination of many years of work," said Shannon Minter, legal director for the National Center for Lesbian Rights, as cited by the Washington Post.

However, amid growing euphoria among gay-marriage proponents, some northern Floridian counties have already expressed their disapproval of same-sex wedding legalization.

"The day is going to come very soon where America is going to wake up and say, 'Whoa! Wait a second! I wanted two guys to live together. I didn't want the fundamental transformation of society,'" said John Stemberger, president of the Florida Family Policy council, as cited by the Associated Press.

According to the media outlet, at least three counties in northeast Florida have closed their courthouse chapels, claiming that no wedding ceremonies, neither gay nor straight, would be performed there anytime soon.

Remarkably, Jeb Bush, a potential Republican presidential candidate who is known to be against the concept of gay marriage, urged Americans to respect "the rule of law" in the wake of his state's decision.

"We live in a democracy, and regardless of our disagreements, we have to respect the rule of law. I hope that we can show respect for the good people on all sides of the gay and lesbian marriage issue – including couples making lifetime commitments to each other who are seeking greater legal protections and those of us who believe marriage is a sacrament and want to safeguard religious liberty," Jeb Bush was quoted by Time Magazine as stating.

The media source notes that Republican candidates preparing for the presidential race have found themselves in a "tough spot" on the same-sex marriage issue: while their evangelical voters denounce gay unions as illegal, the broader electorate has recently been demonstrating support for same-sex couples.