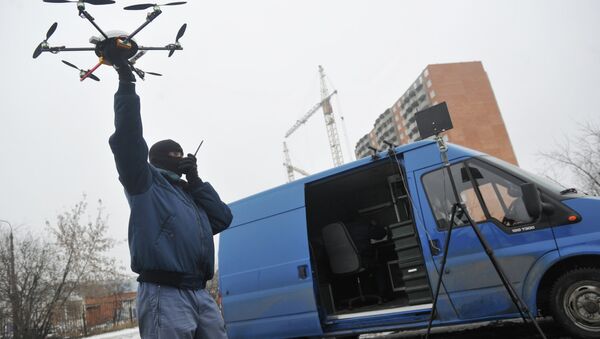 The British Metropolitan Police issued a warning on Tuesday that drones flying over congested areas carry the risk of causing serious incidents, the British newspaper reported.

"I compare them [UAVs] to cars. They are perfectly legal to own but it is very easy to break the laws when you are driving," the Chief Inspector of the UK Metropolitan Police Nick Aldworth was quoted as saying by the Evening Standard on Tuesday.

Drones are now prohibited from being flown within 150 meters (492.13 feet) of a crowded zone or within 50 meters (164 feet) of buildings, not belonging to the drone owner. Other zones, in particular airports, have a restricted area around them, according to the UK Civil Aviation Authority.

World Wide Web Virtuosos: Peaceful Drones Skillfully Perform Strauss
The news comes as the number of reported cases involving UAV crashes, drones flying in exclusion areas and even spying on people is on a steep rise. One of the most serious episodes occurred at London Heathrow Airport in July 2014 where a drone nearly crashed into an airplane, according to media reports.

Another case of drones flying in immediate proximity to London's landmarks is that of an UAV that filmed the view from the height of the Shard skyscraper. The video came in for sharp criticism for filming in a restricted zone, the Independent reported in December 2014.

UAVs were among the most popular Christmas gifts in 2014 in the United Kingdom. In total, there are currently over 50,000 drones in Britain, according to the Evening Standard. However, these remotely-controlled aerial vehicles have contributed to an increase in incidents, endangering lives.