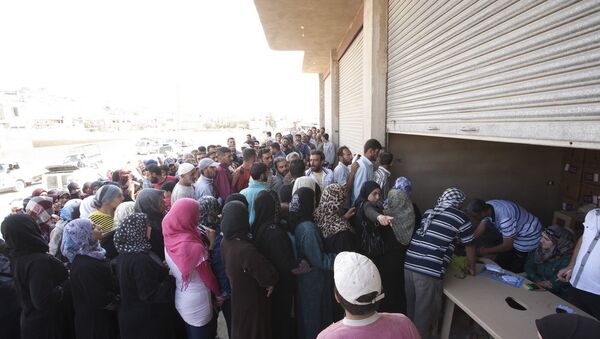 Lebanese authorities have announced new visa restrictions as the number of official refugees in Lebanon has risen to more than a million.

Lebanon Launches Crisis Plan to Ease Impact of Syrian Refugee Influx: PM
MOSCOW, January 6 (Sputnik) – Lebanon is turning away Syrian refugees at its border as a result of strict new visa rules that have been introduced in an effort to curb the flow of immigrants into the country as a consequence of Syria’s ongoing civil war, AP reported on Monday.

“We have enough. There’s no capacity any more to host more displaced,” Interior Minister Nohad Machnouk told a press conference according to the agency. He commented on the new regulations, which establish different visa categories and impose strict time limits, in contrast to the previous, relatively open border regime.

The new regulations represent a formalization of previous restrictions put in place unofficially in October, whereby the number of refugees entering the country was sharply reduced. On October 21 Social Affairs Minister Rashid Derbas announced to the Lebanese Daily Star that refugees would no longer be accepted. “Any Syrian national is welcome, but not as a refugee,” he told the paper, adding that “stopping the refugees is final, because Lebanon is no longer able to host any more.”

World
McCain, Other US, French Officials Accused of Visiting Syria Illegally
On October 31 the paper reported that the UN’s High Commissioner for Refugees (UNHCR) in Lebanon, Ninette Kelly, noted a consequential drastic decrease in the number of those seeking sanctuary: “The number of refugees who approach our offices to be registered has decreased in the last few weeks, between 75 and 90 percent on any given day,” Kelly said.

Despite declarations from Lebanese authorities that the new measures apply only to those seeking to enter the country, and not people already within its borders, the Washington Post reported apprehension among those already taking refuge there. “These measures are bad for us. They mean that Lebanon is telling us that Syrians should get out,” one refugee, Ahmed, who fled from Homs with his family of six children, told the paper.

On Tuesday, the Daily Star reported that Syria's ambassador to Lebanon had criticized Beirut's decision to introduce the visa restrictions for Syrians, on the grounds that the move violates bilateral agreements. "The decision contradicts bilateral agreements signed between Lebanon and Syria, which stipulate that any change in the treaties should be discussed between the two countries," Ali Abdul Karim Ali was quoted as saying by the newspaper. "But if Syria reacts by closing the border to [transit] trucks, Lebanon would be harmed more than Syria. We have to wait and see how the matter would develop," he warned.

According to UN figures, Lebanon, which in 2011 had a population of 4.3 million, is hosting more than 1.1 million officially-registered Syrian refugees; it started taking them in when the conflict in its neighboring country began in 2011. A spokesman for the UNHCR told the Washington Post on Monday that it had asked for clarification from the Lebanese government that in the most vulnerable cases, those in seeking refuge would continue to be provided with it.