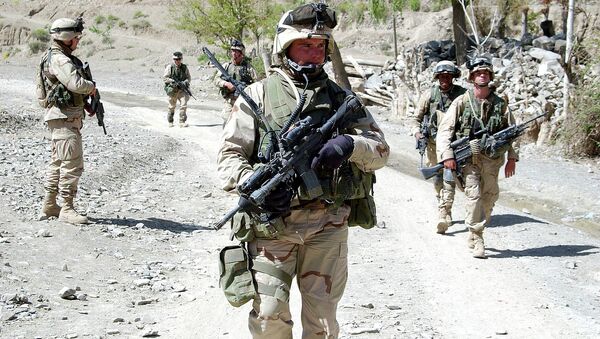 © US Army / SPC Gul A Alisan
Subscribe
Afghan government likely to withstand a burgeoning Taliban insurgency within the coming year after the US combat troops withdrawal.

NATO Airstrikes Kill Nearly 20 Militants in Afghanistan: Reports
WASHINGTON, January 6 (Sputnik) – The government of Afghanistan will most likely be able to withstand a burgeoning Taliban insurgency within the coming year after the US combat troops withdrawal, two analysts told Sputnik.

"I am pretty confident we are not going to see a collapse of the [Afghan] regime in 2015. There will likely be an ongoing insurgency but the Afghan state and its security forces are not a house of cards that are going to be blown away by the Taliban wind," expert advisor to Stratfor, a global intelligence firm, on Middle Eastern and South Asian affairs Kamran Bokhari told Sputnik Monday.

Bokhari, who is also the author of "Political Islam in the Age of Democratization", said the reality on the ground is much different from that of the 1990s, when the Taliban was able to advance in Kabul after the collapse of the Soviet-backed regime.

According to the analyst, the Taliban would be unable to become a guerrilla group out of an insurgent terrorist force, because the United States will still be providing air support to Afghan National Security Forces (ANSF). Therefore, US air power will prevent the Taliban from massing troops and will help disrupt its logistical movements.

Moreover, Afghanistan's cooperation with Pakistan would be critical, Bokhari noted, as it would help to "squeeze the Taliban from both directions." The analyst noticed there has been more collaboration with Pakistan since new Afghan President Ashraf Ghani came into office.

Finally, Bokhari underlined that Afghanistan over the past few years has been witnessing the emergence of an actual state, a development the country has not seen since the Communist regime in Kabul fell in the early 1990s.

Meanwhile, the Afghan government is also pursuing peace talks with the Taliban.

Khalil Nouri, founder of an Afghan think tank, the New World Strategies Coalition, also said the Taliban may need to come to the negotiating table because it is unlikely that they will fight their way into power.

"Mullah Omar [spiritual leader, commander of the Taliban] needs to consider this. The Taliban have very little chance of coming to power again primarily because they have little mass popular support. When the majority does not want you, then you are doomed," Nouri told Sputnik.

The United States will not abandon Afghanistan because it has too much of a strategic interest in it, he added. Afghanistan will become an "Observation-Tower-State" that will help the United States monitor Russia, China, Iran and Pakistan more closely, according to the expert.

"The US and NATO have invested too much time and capital in Afghanistan. That will not go to waste, as it did during the post-Soviet withdrawal in 1989, when the United States turned its back on Afghanistan," Nouri said.

Nouri was less optimistic than Bokhari about Afghanistan's future development and indicated that poor economic conditions and corruption would likely destabilize the state before a Taliban reemergence does.

The United States withdrew combat troops from Afghanistan in the end of December 2014 after a 14-year occupation. The withdrawal raised fears of growing insurgent violence and questions on whether or not the ANSF can adequately defend the country. According to the UN, a record number of civilians were killed in Afghanistan in 2014.

The new US mission that started on January 2, Resolute Support, will focus on training and advising the ANSF. On January 1, President Ghani wrote on his Twitter that "from now on, we must take the responsibility of securing Afghanistan," and the United States "will train/advise the ANSF to prevail."