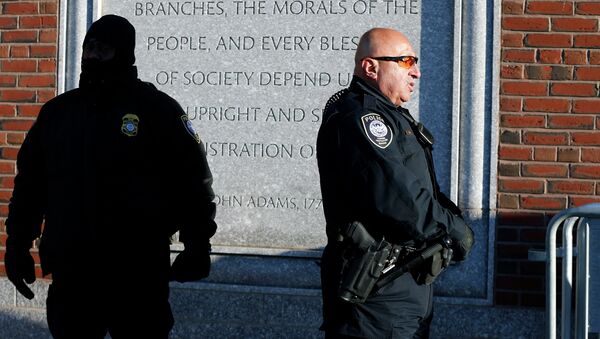 © AP Photo / Michael Dwyer
Subscribe
International
India
Africa
US District Court Judge George O'Toole Jr., who will oversee the trial of Boston Marathon bombing suspect Dzhokhar Tsarnaev, said that the jury would decide whether or not to pursue the death penalty.

Jury selection began on Monday in a trial that could lead to 21-year-old Tsarnaev receiving the death penalty. Twelve jurors and six alternates will be selected from more than 1,000 jury candidates.

O'Toole said that the jury and not the judge would decide whether or not to pursue the death penalty. Prosecutors have gathered much evidence against Tsarnaev and plan to call at least 100 witnesses in the trial.

Jury Selection in Tsarnaev Boston Bombing Trial to Begin in Massachusetts
The defense, rather than plead Tsarnaev's innocence, will attempt to avoid the death penalty and push for life imprisonment. One argument they will make is that the suspect was influenced by his older brother, Tamerlan Tsarnaev, who was killed in a shootout with police four days after the bombing.

The Boston Marathon bombings, which took place on April 15, 2013, left three people dead and more than 260 injured. The Tsarnaev brothers were identified as suspects.

Earlier on Monday, Tsarnaev appeared in court for a jury selection process. Prior to that, the suspect's lawyers have made requests to dismiss the indictment because of irregularities in the grand jury selection process. They also reportedly intended to move proceedings from Boston to another US city over fears that the atmosphere in Boston could have an impact the process.