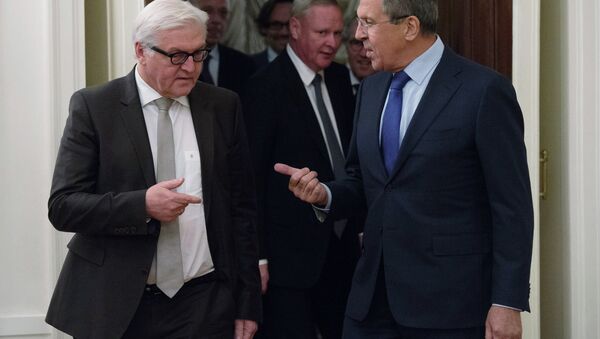 © Sputnik / Maksim Blinov
Subscribe
The foreign ministers of Russia, Germany, France and Ukraine are to discuss all aspects of the situation in Ukraine, including Minsk agreements.

Normandy Format Meeting of Political Directors on Ukraine to Be Held Monday
MOSCOW, January 5 (Sputnik) — The meeting of the foreign ministers of the so-called "Normandy Quartet", which includes Russia, Germany, France and Ukraine, and is set to discuss Ukrainian crisis, has started in Berlin, local diplomatic sources told RIA Novosti on Monday.

The parties are to discuss all aspects of the situation in Ukraine, including Minsk agreements. The meeting is being held in the German Foreign Ministry building behind closed doors.

Earlier on Monday, Ukraine's National Security and Defense Council spokesperson Andriy Lysenko confirmed during a briefing in Kiev that the meeting had begun.

Anti-Russia Sanctions to Be Lifted if Progress on Ukraine Reached: Hollande
In December 2014 Ukrainian President Petro Poroshenko announced that leaders of Germany, France, Russia and Ukraine would meet in Astana, Kazakhstan’s capital, on January 15 in the Normandy format for Ukraine’s reconciliation talks.

The Normandy format was established in June 2014, when Russian, French, German and Ukrainian presidents met in Normandy to discuss the Ukrainian crisis.

OSCE Reports Increase in Ceasefire Violations, Casualties in East Ukraine
The Ukrainian peace talks have been held in several formats – Normandy, Minsk, Geneva and Weimar formats. The Minsk format, which includes Ukraine, the self-proclaimed Donetsk and Luhansk People's Republics, Russia and the Organization for Security and Co-operation in Europe, has been most effective, as it helped to reach a ceasefire deal between Kiev and independence supporters in the Ukrainian southeast in September 2014.

On Sunday, Denis Pushilin, negotiator from the Donetsk People's Republic (DPR) at the Minsk peace talks, said that the forthcoming meeting in Astana could serve as an accelerator for the Minsk talks.