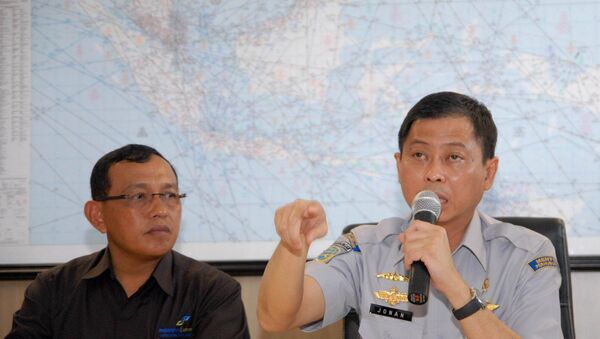 Indonesia's Transportation Ministry blamed the AirAsia Indonesia airline for flying without authorization on the day AirAsia flight QZ8501 crashed. In addition, Transport Minister Ignasius Jonan blamed the pilot of the crashed plane for not undergoing a briefing on weather conditions prior to the flight.

MOSCOW, January 5 (Sputnik) — The AirAsia Indonesia airline, whose Airbus crashed nine days ago in the Java Sea en route from Surabaya, Indonesia, to Singapore had no authorization from Indonesia's Transportation Ministry to fly on the day it crashed, the ministry said Monday.

Fatal AirAsia Flight Violated Route Permit: Indonesian Transport Ministry
"It is already clear that there was a violation because the flight took place against an agreed permission," the ministry's acting director general for air transportation Djoko Murjatmodjo was quoted by the internet news portal Detik.com as saying.

The authorization of AirAsia Indonesia flights from Surabaya to Singapore was given only for Mondays, Tuesdays, Thursdays and Saturdays. Meanwhile, for the past three months, the flights were made on Wednesdays, Fridays and Sundays (when the crash occurred).

Most importantly, the plane was able to get a one-time permission to perform the flight in both Surabaya and Singapore.

According to Murjatmodjo, the ministry is currently investigating who gave permission for the plane to take off.

Earlier, Indonesia's Transport Minister Ignasius Jonan blamed the pilot of the AirAsia flight QZ8501 that crashed in the Java Sea on December 28 for not undergoing a briefing on weather conditions prior to the flight, Indonesia's Detik News reported Friday.

The air traffic control would have known if the fight was not given permit to fly? So why did they allow the flight to take off? #QZ8501

However, Indonesian pilots spoke out against charges of the transport minister. Sardjono Jhony Tjitrokusumo, a senior Indonesian pilot, claimed the minister's charges were groundless in an open letter sent to the Indonesian media.

"Don't make things up and say pilots are at fault if they don't undergo briefing. It is not part of the required procedures," Sardjono said, as quoted by Jakarta Globe.

Sardjono claimed that such briefings are optional, as pilots receive information on weather conditions "printed from systems used by their airlines".

"Can you imagine if all pilots from all flights must be briefed on weather conditions by the BMKG [Indonesian Agency for Meteorological, Climatological and Geophysics]? How many of them will have to stand in line for that?… Don't be ridiculous, especially for those who have no knowledge of aviation," Sardjono was quoted as saying.

The pilot concluded by calling for refraining from commentaries before the results of the National Committee on Transportation Safety investigation are obtained.

Pilot Fadjar Nugroho also wrote in an open letter that pilots do not necessarily have to undergo briefings on weather conditions, as they have an opportunity to get the same information from BMKG website.

"The Internet technology has allowed BMKG to provide information online on its website … It is as good as [those provided by] similar agencies in other countries, which provide their products for free on the Internet," Fajar said, as quoted by Jakarta Globe.

Whilst the flight permit breach on #QZ8501 is a significant finding; I think more publicity should for now go to the recovery operations.

#QZ8501 Does anyone know how many planes are flying across the world right now with no permit to fly?

"Since weather information for flights became available on the BMKG's website, many of my colleagues… no longer need to come to the briefing office. Don't admonish us because we get weather information from the Internet; it is after all provided by the BMKG," he added.

Bad Weather in AirAsia Flight Crash Zone Threatens Rescuers Lives
Following the critics, Director General of Air Transportation of the Transport Ministry Joko Muryatmojo said at a press conference on Monday that Ignatius Jonan had signed a directive requiring mandatory briefings on weather conditions for all pilots before taking off.

Weather conditions are believed to be a possible reason that led to the crash of AirAsia's Airbus A320-200 carrying 155 passengers and seven crew members into the Java Sea.

AirAsia's Flight QZ8501 lost contact with air traffic control on the morning of December 28. It vanished off radars some 40 minutes after takeoff from the Indonesian city of Surabaya. The Airbus A320-200 was carrying 155 passengers, mostly Indonesians, and seven crew members.

To date, 34 bodies have been recovered and nine of the 162 passengers and crew members have been identified.