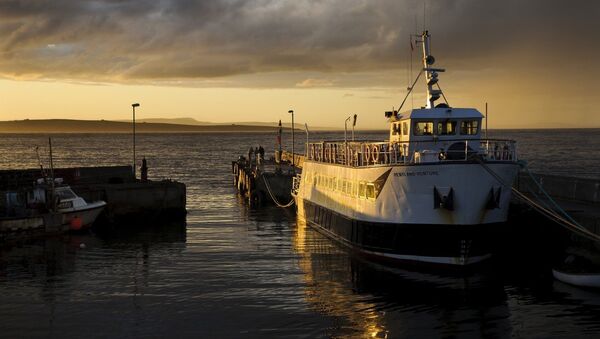 According to the UK Maritime and Coastguard Agency, the search for eight crew missing from the cement carrier "Cemfjord", which had capsized and sank in the Pentland Firth, was suspended Sunday.

Cargo Vessel With 8 People on Board Overturns North of Scotland: Reports
MOSCOW, January 4 (Sputnik) — The United Kingdom's Maritime and Coast guard Agency suspended Sunday the search for the missing crew of the Cemfjord cargo vessel that capsized off the north of Scotland Saturday.

"The search for eight crew missing from the cement carrier "Cemfjord", which capsized and sank in the Pentland Firth, has been suspended this evening, with no sign found of the missing crew," the agency said in an official statement.

According to the Maritime and Coastguard Agency, all of the crew members's families were notified of the search suspension.

On Saturday, a major rescue operation has been launched with four lifeboats, two rescue helicopters and other vessels participating.

The cement-carrying ship Cemfjord was en route to the town of Runcorn in Cheshire when it capsized with eight people on board.