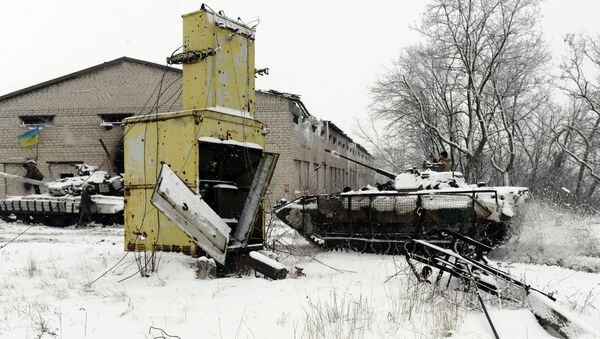 Despite the formal ceasefire and 'silence regime', shells continue to strike Donetsk, the city administration reports.

Ceasefire Violations in E Ukraine Declining Since New Year’s Eve: Donetsk
DONETSK, January 4 (Sputnik) — The Donetsk administration reports of the sounds of shelling in many parts of the city on Sunday.

"As of 17:30 (15:30 GMT) there is tension in Donetsk. Sounds of heavy weaponry can be heard in many parts of the city… Casualty figures are not available," the Donetsk administration said in a statement published on its official website.

Earlier on Sunday, deputy commander of the self-proclaimed Donetsk People's Republic (DPR) militia told RIA Novosti that one civilian was injured in the Ukrainian forces' mortar shelling of a residential district in Donetsk.

Meanwhile, the OSCE Special Monitoring Mission (SMM) reported earlier on Sunday that several ceasefire violations since the introduction of a "silence regime" in early December were recorded in Donetsk over the past weeks.

OSCE Reports Increase in Ceasefire Violations, Casualties in East Ukraine
In September, Kiev and east Ukrainian militia reached a ceasefire deal in Minsk following months of bloodshed, but have since accused each other of violating the truce. Ukrainian President Petro Poroshenko introduced a "silence regime" in a bid to renew ceasefire efforts, which led to fresh rounds of Minsk format negotiations brokered by Russia and the Organization for Security and Co-operation in Europe (OSCE) later in December. The sides agreed on prisoner exchanges and the withdrawal of heavy artillery from the line of contact.