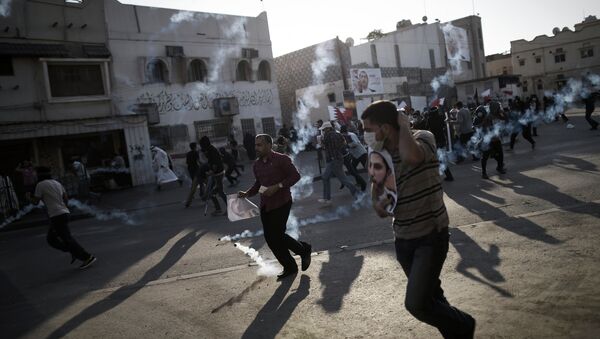 Security forces in Bahrain used tear gas to disperse the unauthorized rally against the arrest of the country's opposition leader.

MANAMA, January 4 (Sputnik) — Bahraini police have used tear gas to disperse the demonstrators, protesting in the capital Manama against the arrest of the country's opposition leader, a RIA Novosti correspondent reported Sunday.

Iraq Holds Talks With Bahrain on Release of Opposition: Parliamentarian
Shiite opposition supporters gathered during an unauthorized rally to demand the release of Sheikh Ali Salman, the leader of the largest Shiite opposition party Al-Wefaq, who has been under investigation since last Sunday. The demonstrators were holding photos of Salman and screaming out slogans in support of Salman's release.

Security forces used tear gas to disperse the unauthorized rally and arranged the police stations along the road, which connects the Shiite villages in the west of Manama to prevent the demonstrators from going there.