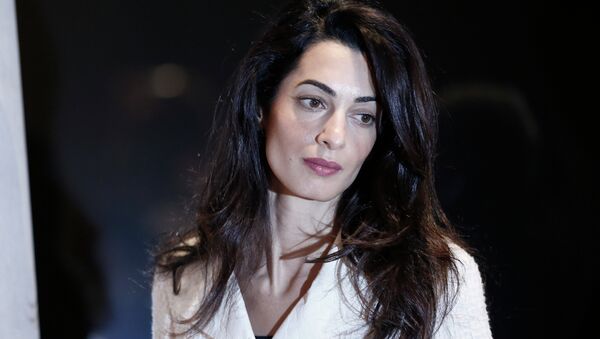 © AP Photo / Petros Giannakouris
Subscribe
Egyptian authorities threatened to arrest Amal Clooney, a human rights lawyer, if she tried to present a report on the independence of the country’s judicial system in Cairo.

Egyptian Court Reduces Jail Terms for 23 Protesters
MOSCOW, January 3 (Sputnik) – Egyptian authorities threatened to arrest Amal Clooney, a human rights lawyer and the wife of Hollywood star George Clooney, if she tried to present a report in Cairo singling out flaws in the country’s judicial system, she claimed in an interview with Guardian.

"When I went to launch the report, first of all they stopped us from doing it in Cairo," Clooney, formerly Alamuddin, told the Guardian. "They said: 'Does the report criticise the army, the judiciary, or the government?' We said: 'Well, yes.' They said: 'Well then, you're risking arrest.'"

The report, titled "Separating Law and Politics: Challenges to the Independence of Judges and Prosecutors in Egypt", was produced for the International Bar Association's Human Rights Institute (IBAHRI). It is based on the findings of a team of legal experts, who visited Egypt in June 2013. Clooney served as a rapporteur for the report, released in February 2014.

The report found that Egypt’s Ministry of Justice wields wide powers over judges "which provide scope for abuse". These powers include the right to assign judges to courts, as well as the ability to decide which judges are seconded to work in government ministries and the right to initiate disciplinary actions against judges. They "threaten independence as they allow the Minister to reward or punish serving judges, and therefore provide an incentive for judges to please the government," the report said.

One of the recommendations, offered by the report, included ending the practice of handpicking judges for certain cases. "That recommendation wasn’t followed, and we’ve seen the results of that in this particular case where you had a handpicked panel led by a judge who is known for dispensing brutal verdicts," Clooney said, referring to the imprisonment of three al-Jazeera journalists.

Clooney represents one of the reporters, Mohamed Fahmy, a Canadian-Egyptian. Along with Peter Greste from Australia and Baher Mohamed, an Egyptian national, Fahmy was found guilty of publishing false news about Egypt, as well as aiding the Muslim Brotherhood, an organization authorities there have considered a terrorist organization since December 2013.

On January 1, Egypt’s Court of Cassation ordered a retrial of three al-Jazeera journalists who were imprisoned there last year. Clooney has doubts about the retrial. "If the idea is: well, there were errors and now there’s going to be a retrial, but then the retrial operates on the same basis as the original one, that doesn’t really mean much,” she told the Guardian. "Unfortunately we have to conclude that we can’t rely on these Egyptian court processes to achieve a fair or swift result," the lawyer added.

In June 2014, Greste and Fahmy were sentenced to seven years in prison. Mohamed received a 10-year sentence. The verdict sparked an international outcry.

Al-Jazeera has demanded the release of its reporters, and is calling the accusations against them absurd.