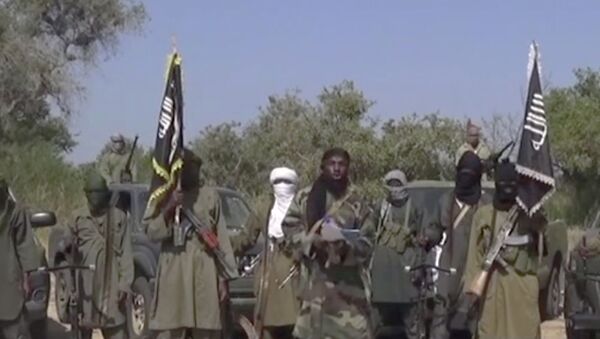 Africa
Boko Haram Video Shows Militants Killing Dozens of Captive Men in a School
"They came in pick-up trucks armed with guns and gathered all the men in the village outside the home of the village chief where they preached to us before singling out 40 of our boys and taking them away," Bulama Muhammad told the news agency.

Another witness, Mohammed Zarami, told Reuters that the young men were mostly mostly between the ages of 15 to 23. "As I am talking to you now, there is no youth in our village," he said.

"My two sons and three nephews were among those taken away by the Boko Haram gunmen," Muhammad stated. He fears his relatives will be forced to join the militant group.

Residents, who fled the village, said the men were presumably taken to Sambisa forest, where one of Boko Haram’s key bases is believed to be located. Following the mass kidnapping, Malari residents have relocated to Maiduguri, the capital of the Borno State.

Africa
Boko Haram Kills 32, Kidnaps Nearly 200 Women, Children in Nigeria
"When we heard of the kidnap of 40 boys in Malari by Boko Haram we decided to leave because we could be the next target," said Alaramma Babagoni, who fled from the nearby village of Mulgwi, as quoted by AFP.

"Boko Haram has been abducting young men from villages in the area because we are close to their stronghold in Sambisa forest," he explained.

Boko Haram is a militant group, which aims at establishing an Islamic state in northern Nigeria. Large swathes of land in the Borno State, as well as in neighboring Adamawa and Yobe are believed to be under control of the Islamists. Boko Haram insurgency left over 10,000 people dead.