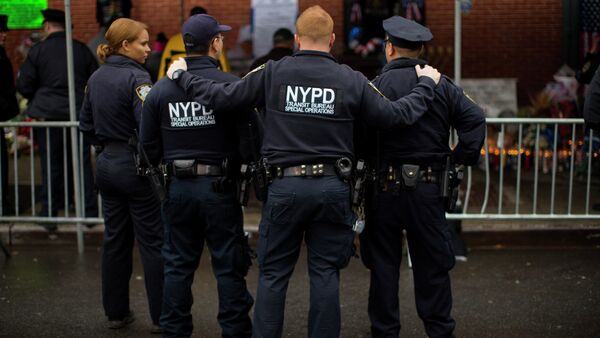 © REUTERS / Mike Segar
Subscribe
The Commissioner of the New York Police Department urged police officers not to turn their backs on the mayor of New York at the funeral of a NYPD officer killed last month.

"A hero’s funeral is about grieving, not grievance," Bratton said in an internal memo distributed to NYPD officers, as quoted by the New York Post. "I remind you that when you don the uniform of this department, you are bound by the tradition, honor, and decency that go with it," Bratton stated referring to an incident at Ramos’s funeral.

NYPD Commissioner Says Police Feel Targeted by the US Federal Government
Last Saturday, hundreds of police officers turned their backs on the NYC Mayor Bill de Blasio when he was speaking at the ceremony.

"The city’s and the country’s consciousness of that funeral has focused on an act of disrespect shown by a portion of [police] officers," Bratton said. "It was not all the officers, and it was not disrespect directed at Detective Ramos. But all officers were painted by it. And it stole the valor, honor and attention that rightfully belonged to the memory of Detective Rafael Ramos’ life and sacrifice," he added.

"That was not the intent, I know. But it was the result," Bratton said.

Some police officers believe that De Blasio is responsible for encouraging anti-law enforcement sentiment that led to the policemen's murders.

NYPD Officers Shutting Eyes to Minor Crimes After Brooklyn Killing: Reports
Rafael Ramos and Wenjian Liu were killed by Ismaaiyl Brinsley in Brooklyn while they were sitting in their patrol car. The gunman later committed suicide. Brinsley allegedly attacked them to avenge Michael Brown and Eric Garner, black men who were killed by white police officers. He had a history of mental instability, according to the NYPD.

"[D]etectives have feelings too, and I respect their decision to express them if they so choose," said Michael Palladino, the president of the Detectives’ Endowment Association, as quoted by the New York Times. Palladino added that the DEA will not issue guidelines for police officers on how to behave at the funeral.

Funeral service for NYPD officer Wenjian Liu will be held on January 4, according to NYPD. De Blasio is expected to deliver a eulogy at the ceremony, according to the New York Times.