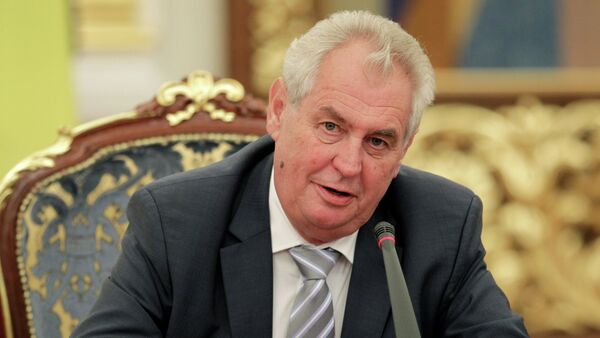 © AP Photo / Sergei Chuzavkov
Subscribe
International
India
Africa
Milos Zeman has accepted Russia's invitation to participate in the celebrations of the 70th anniversary of the Victory in the Great Patriotic War on May 9, 2015.

World
Obama Has No Plans to Visit Russia Any Time Soon: White House
PRAGUE, January 2 (Sputnik) — President of the Czech Republic Milos Zeman will visit Moscow in May to take part in the celebrations of the 70th anniversary of the Victory in the Great Patriotic War, the presidential spokesperson told RIA Novosti Friday.

"Mr. President has received an invitation to visit Moscow on May 9, 2015 to commemorate the 70th anniversary of the Victory over fascism. He accepted this invitation with gratitude," Jiri Ovcacek said.

In 2015, military parades will be held in 26 Russian cities to mark the 70th anniversary of the Victory over the Nazis in World War II. About 14,000 members of the Russian armed forces, 194 tanks and 150 planes and helicopters are expected to participate in the Victory Parade on the Red Square in Moscow next year.

Russia
Russia Likely to Respond to New Round of Western Sanctions: Kremlin Aide
Russia will also hold a number of joint events with China to commemorate the victory over German fascism and Japanese militarism in the European and Asian theaters of World War II.

Invitations to attend the Victory Parade in Moscow have been sent to a number of world leaders. On December 22 Kremlin aide Yury Ushakov said that North Korean leader Kim Jong Un may join the celebrations. The same day the United States' National Security Council spokesman told Sputnik news agency that US President Barack Obama had no plans to attend the Moscow event.