Eurasian Union: the Birth of a new Giant 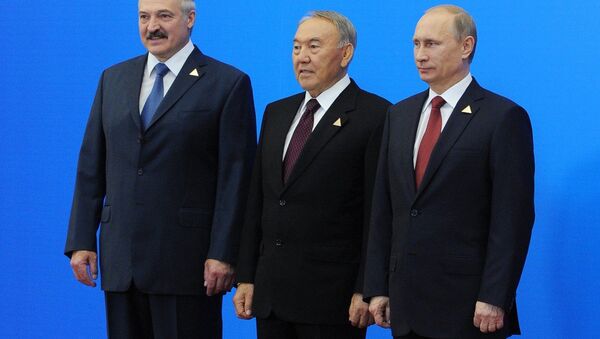 On January 1, 2015 Russia, Belarus and Kazakhstan formed the Eurasian Union. The new economic alliance is a further step in the three countries' cooperation, replacing as it does the Customs Union that Moscow, Minsk and Astana formed in 2010.

The Eurasian Economic Union creates a common market of the three countries based on rules of the World Trade Organisation. In line with the treaty the territory of the EAU is free for the movement of goods, services and labour resources while the signatories undertake to carry out coordinated or unified economic policies. Member states also have agreed to bring their national legislations in line with Union rules within 10 years.

The new economic alliance comprises countries with a combined population of 170 million and is the biggest organisation of its kind in the post-Soviet space. Its trade turnover currently stands at $66 billion having increased by almost 50% over the past three years in the framework of the Customs Union. The three member countries of the new Union account for 20% of global reserves of gas and 15% of oil.

President Nursultan Nazarbayev of Kazakhstan welcomed the emergence of the Union as the ‘birth of a new geopolitical reality of the 21st century'. At the same time he also cautioned against repeating mistakes of the European Union: "The point is that none of the participating countries were subject to de-industrialisation, and traditional industries did not suffer. Lessons from the European recession are in this."

Russia's president Vladimir Putin described the signing of the treaty as ‘epoch-making' and ‘historic'. "The geographical position permits us to create transport, logistic routes of not only regional, but also global importance that permits attracting massive trade flows in Europe and Asia," Putin said ahead of the signing ceremony in Astana, Kazakhstan on Thursday.

Belarus president Alexander Lukashenko also spoke highly of the treaty but wants to take it further:

"We believe the Economic Union will be the foundation for the future of political, military, and humanitarian unity."

Currently comprising only three countries of the former USSR, the Eurasian Union has significant geopolitical potential, even though many in the West have been tempted to write it off as a ‘chimera'. For one, former head of the US National Security Council Zbigniew Brzezinski described EAU as ‘altogether unrealistic' and an ‘absurd concept'.

But the European Union considers it a ‘challenge'. The Eastern Europe Studies Centre back in 2012 spoke of the future Eurasian Union as a ‘challenge for the European Union and Eastern Partnership countries'. And a prominent analyst with the US-based Heritage Foundation Ariel Cohen sees the Eurasian Union as ‘the nucleus of a larger transnational entity' and recommends that the "U.S. should work with its allies and friends in Europe and Asia to balance the Russian geopolitical offensive and protect U.S. and Western interests."

Comments and conclusions such as these offer no explanation for why the US should strive to curtail economic cooperation of willing neighbouring states thousands of miles from US shores.

Beset by its own problems, both economic and political, the European Union is also clearly unenthused by the emergence of an alternative economic entity. Even though back in 2011 Vladimir Putin spoke about learning lessons of the EU: "In fact, we are adapting the experience of the Schengen Agreement that benefits Europeans as well as everyone who comes to work, study, or holiday in the EU."

The Eurasian Union intends to avoid some of the mistakes that have blighted and burdened the European Union — in particular, the imbalances in migration that have created serious domestic problems for member states such as UK that attract large numbers of migrant workers from other, poorer EU countries.

Another lesson for the Eurasian Union to be learned from EU experience is clearly the need to avoid creating top-heavy bureaucratic structures and delegating excessive legislative powers to the Brussels which have been creating a great deal of tension in EU member countries.