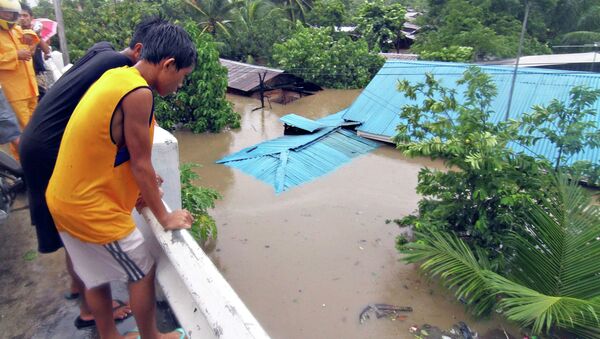 At Least 29 Dead, 10 Missing as Tropical Storm Jangmi Hits Philippines
The storm claimed the lives of 29 people in the central provinces of Samar and Leyte, according to the BBC. Of those, 19 were killed by a surprise landslide in the city of Catbalogan.

"We did not expect a deluge. We thought the hill where the landslide hit was tough as rocks," said Stephany Uy-Tan, the mayor of the city, as quoted by the BBC.

Philippines authorities say that more lives could have been saved if they had issued more weather warnings.

"Probably we did not put (enough warnings) out in the media," Alexander Pama, chief of the National Disaster Risk Reduction and Management Council (NDRRMC), told DZMM radio, as quoted by AFP.

Fury of Nature:Typhoon Hagupit Wreaks Havoc in Philippines
Over 80,000 people were evacuated from the central and southern provinces of the Philippines, according to the BBC. However, some locals refused to leave the area which was hit by the storm, Pama said.

"Maybe this will drive home the point to our countrymen that things are different now. Maybe now, when people are asked to evacuate, they will not resist," he added, as quoted by AFP.