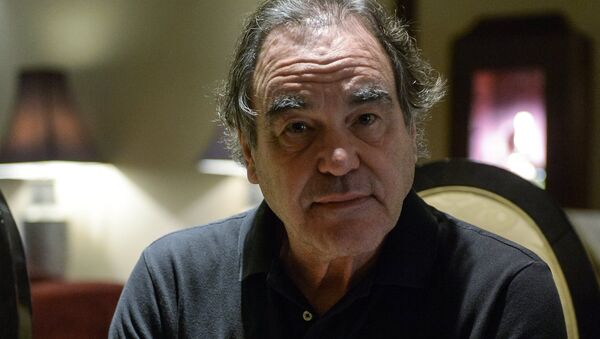 US film maker claims he is currently engaged in production of a documentary about Ukrainian president Viktor Yanukovych.

WASHINGTON, December 31 (Sputnik) – US filmmaker Oliver Stone is currently engaged in production of a documentary about Ukrainian president Viktor Yanukovych, who fled the country following the February coup, according to the post on his Facebook page published Tuesday.

"[I] Interviewed Viktor Yanukovych 4 hours in Moscow for new English language documentary produced by Ukrainians. He [Yanukovych] was the legitimate President of Ukraine until he suddenly wasn't on February 22 of this year. Details to follow in the documentary," Stone said.

According to the renowned filmmaker, in the aftermath of the coup, "the West has maintained the dominant narrative of 'Russia in Crimea' whereas the true narrative is 'USA in Ukraine.' The truth is not being aired in the West. It’s a surreal perversion of history that’s going on once again, as in Bush pre-Iraq ‘WMD’ [Weapons of Mass Destruction] campaign."

Stone also said that the shooters, who killed killed 14 police officers, wounded some 85, and killed 45 protesting civilians during the clashes in Kiev, were outside "third party agitators."

"Many witnesses, including Yanukovych and police officials, believe these foreign elements were introduced by pro-Western factions with CIA fingerprints on it," he stated.

Oliver Stone Questions Theories on MH17 Crash Circulating in US Media
Stone concluded by expressing hope that the truth about the Ukrainian coup would come out in the West soon "in time to stop further insanity."

Former Ukrainian president Viktor Yanukovych was ousted late February following mass rallies in Kiev, triggered by the president's refusal to sign a European Union association agreement. Yanukovych fled the country for Russia, while the protests led to the violent unrest in Ukraine, that dramatically escalated in mid-April, when Kiev launched a military operation against independence supporters in the Donetsk and Luhansk regions.