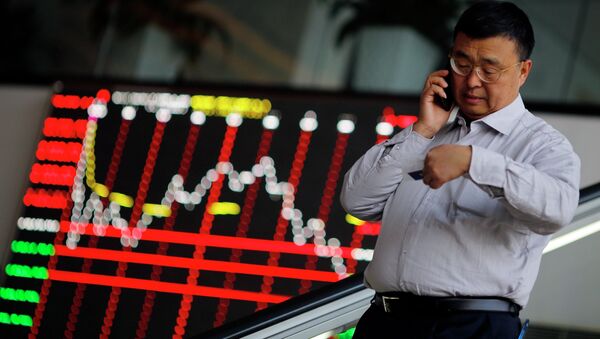 Uncertainty over the future of Greece within the Eurozone and anxiety about global commodity prices saw Asian stock indices finish the year in a slump on Tuesday.

Eurozone Markets Fall as Greek Parliament Forces January Election
US crude futures were down to $53.67 a barrel; a global glut in supply held prices at a 5-and-a-half-year-low, CNBC explained. Meanwhile the news out of Greece that an election set for January may result in the victory of the leftist Syriza party victory left traders jittery. Syriza aims to annul a large portion of Greece's debt and to revise the terms of the EU and IMF bailout, Reuters explained.

Japanese heavyweights Fast Retailing, the mobile carrier Softbank, Fanuc robotics, and Fujifilm Holdings all closed down between 1.5 to 2 percent, accounting for much of the overall loss. Despite the down finish, Japan's TOPIX index gained 8.1 percent for the year, which was attributed largely to the Japanese Central Bank's policy of quantitative easing. Prime Minister Shinzo Abe's government has promised corporate tax concessions in the New Year, CNBC notes.

Oil Prices Rise Amid Militant Attacks on Libyan Oil Depots
Australia's S&P ASX 200 also closed on a down note, due largely to falling commodity-related stocks, including gas, oil, gold and mining shares. A strong American dollar took a toll on the Australian dollar, which finished at AUD 0.81 per USD, a four-and-a-half-year low for the currency.

Korea's KOSPI was down 0.6, which was attributed in part to losses of between 1.3-1.5 percent for major steelmaker Posco and Hyundai Motor.

Chinese indexes slumped following the release of figures reflecting an 18-month low in manufacturing statistics; the blow was softened following Chinese authorities' announcement of measures to stimulate the economy.

The closing out of positions and general decline in trading activity is said to be related in part to traditional year-end jitters. Tokyo-based money manager Takashi Aoki told Bloomberg that "with the holidays coming up, investors are wanting to sell out of some positions to limit any risk of bad news coming out while the market is closed."