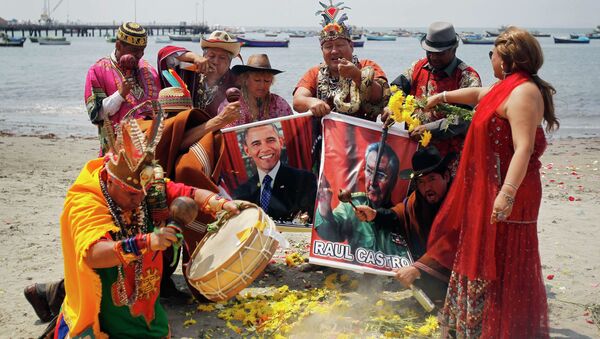 Daniel Zubov
All materialsWrite to the author
Acknowledging the failure of fifty years of economic sanctions, President Obama announced his intention to "leave behind the legacy of both colonization and communism" and normalize relations with the island nation.

WASHINGTON, December 30 (Sputnik) The normalization represents a victory for "soft power" advocates in the intelligence community as well as for commercial, tourist, and banking interests who are eager to return again to extract whatever profits they can from the island.

The "reset" is opposed by Cuban exiles and their elected representatives who want to continue using sanctions and covert operations to overthrow the Castro government.

Ordinary Cuban People Suffered Most From US Blockade: Journalist
The history of Cuban-American relations dates back to the founding conflicts of North America. The British, French, and Spanish imperial colonies were overthrown during the Revolutionary War (1775-1783), Spanish-American Wars (1808-1833), the Mexican Civil War  (1810-1821), and the various Latin American wars of independence led by Simon Bolivar.

While European power in America was slipping after the Napoleonic wars, America’s fifth President, James Monroe, was creating a doctrine to recognize the newly independent nations. In 1883, Monroe purchased territory from Spain which ran from current-day Florida to Oregon and detailed the Monroe Doctrine in 1823, when only Cuba and Puerto Rico were still under Spanish rule.

After his Presidency, the Doctrine was used to justify American expansion up to the Pacific Ocean, including the 1845 annexation of Texas (just nine years after the revolution separating the Republic from the larger Mexican State) and the 1848 Treaty of Guadalupe-Hidalgo which set the Rio Grande as the border between Mexico and Texas and transferred the modern American southwest away from Mexican Control.

It took three wars between 1868 and 1898 to remove Spain’s colonial control from Cuba, culminating in the 1898 Treaty of Paris ending the Spanish-American War and relinquishing Spanish control over Cuba, Puerto Rico, Guam, and the Philippines.

To fill in that gap, Congress passed an Amendment during the debate on authorizing the Spanish-American War, stating there would be no American military presence. Three years later in 1901, Congress passed the Platt Amendment, which defined America’s ability to intervene to preserve "Cuban independence" and granted the United States the rights to a military base at Guantanamo Bay.

By 1904, President Theodore Roosevelt announced an expansion of the Monroe Doctrine, beginning the process of America replacing the European powers in colonizing Latin America. American troops occupied Cuba in 1906 and 1912, and from 1940 until 1944 Fulgencio Batista came to power with the help of the American State Department. After living in the US for eight years, Batista’s 1952 coup and brutally repressive regime paved the way for the Cuban Revolution of Fidel Castro and Che Guevara.

Castro and Guevara were backed by the Cuban people who were determined to assert national sovereignty and end the drug and prostitution industries set up by the US mafia and Central Intelligence Agency. The Cuban revolution also reclaimed beaches, sugar, and tobacco farms from US oligarchs and began the process of providing education for Cuban children and the provision of universal free national health care.

Cuban independence, backed by the Soviet Union and the Warsaw Treaty nations, amplified fears that Cuba’s example would inspire other countries and would increase Soviet influence in the region. The potential introduction of non-capitalist economics fed growing military tensions which led to the implementation of diplomatic and trade embargoes in 1960 and ’61 and the Cuban Missile Crisis of 1963 and fifty years of aggression which included several assassination and coup attempts.

US Must Change Stance on Cuba to Gain Influence in Latin America: Official
However, much like in the current conflict with Russia, the Cold War mindset did not end after the fall of the Berlin Wall. Americans eager to smoke Cuban cigars and visit the beaches of Havana were defeated by hard-line Cuban exiles, many of whom left Cuba in 1980.

Desiring a return to capitalist economics and an alliance with America, Cuban exiles helped tilt Florida’s electoral votes for Republican candidates Ronald Reagan (in 1980 and 1984), George Bush (1988 and a loss in 1992), and again for George W. Bush in 2000 and 2004.

Without delving into a full account of the 2000 election when the Supreme Court ordered the State of Florida to stop counting ballots based on the idea that a potentially accurate recount could "threaten irreparable harm" to George W. Bush, the close margin was likely swayed by the case of Elian Gonzalez. The 7-year old lost his mother during a previous attempt to defect from Cuba, so when he arrived in Florida, there was a dispute over whether to return the boy to the custody of his father who still resided in Cuba or to more distant relatives in Florida.

The exile community, led by Republican members of Congress Ileana Ros-Lehtinen and Lincoln Diaz-Balart, and Democrat Robert Menendez (now chairman of the Senate Foreign Relations Committee), grew stronger by demanding the boy be separated from his father, and made the continuation of sanctions a requirement for gaining their support.

In 2008, Senator Obama campaigned on resetting relations with Cuba, but despite his victory in Florida, Cuban influence against normalization expanded. Lincoln Diaz-Balart was joined in Congress by his brother Mario in 2003. Congressman Menendez was elected Senator in 2006, when New Jersey also elected Democratic Representative Albio Sires. Senator Menendez was joined by two hard-line anti-Cuban Senators with the election of Marco Rubio in 2010 and Ted Cruz in 2012.

These Senators are already discussing ways to block President Obama’s policy, including preventing the nomination of an Ambassador to Cuba, and refusing to remove Congressional impediments to full normalization.

The Cuban government has indicated they will continue controlling the means of production, likely limiting major profits for American businesses eager to exploit a new market.

Castro: Cuba to Conduct Respectful Dialogue With US
The early victors of the reset seem to be tourists and the tourism economy. Havana must prepare for the influx of American visitors and their financing, which could greatly impact the Cuban economy.

American commentators are openly speculating about the deal creating a "freedom-loving capitalist democracy" in Cuba, noting that the embargo policy had failed in achieving this goal.

The deal also includes greater access to American internet and commentary – the long held goal of an American intelligence community which had illegally and ineffectively used TV and Radio Martí to spread propaganda against the Cuban government.

It is yet to be seen how these American influences will impact Cuban society, but it is a definite defeat for hard liners like Senators Rubio and Menendez who continue to argue that those desiring a counter-revolutionary overthrow of the Cuban government should have the explicit and unlimited support of the American government.

It is clear from the US backed coup in Ukraine that Obama’s new "Cuba reset" certainly does not represent any fundamental policy shift away from interference in the internal affairs of other states, including the engineering of fascist coups to implement US policies.

While it is unclear whether the "Cuban reset" will last longer than the attempts at a "Russian reset," the normalization of diplomatic relations is a testament to the failure of economic sanctions and the confrontational and aggressive mindset of the Cold War. 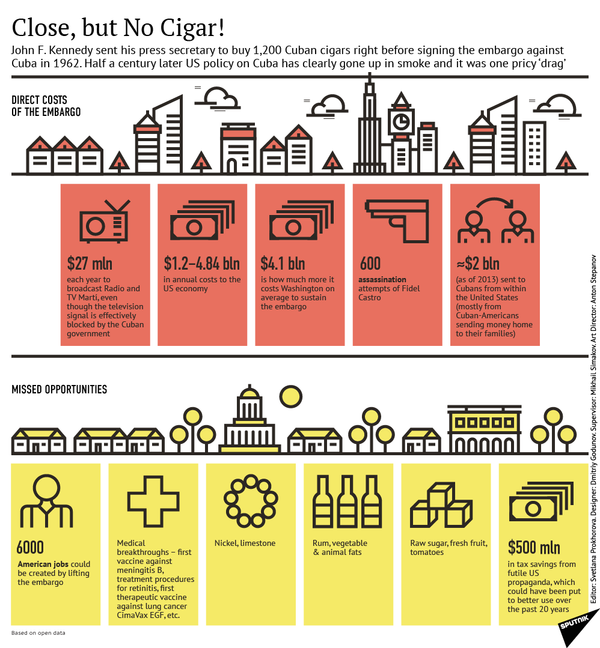