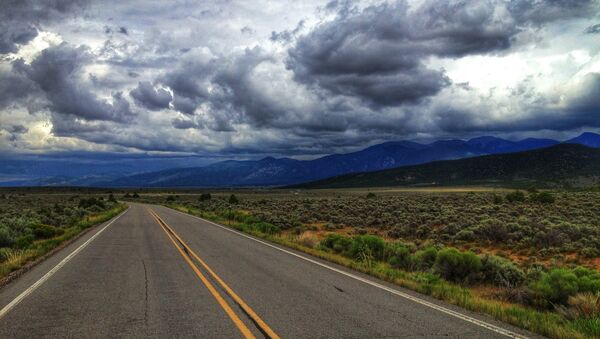 Scientists are beginning to question the ramifications of a giant Delaware-sized methane hot spot high up in the air. The “giant plume” is the largest collection of greenhouse gas in the air above the U.S. and is likely the result of natural gas leaks.

It’s located over a stretch of desert in Southeast New Mexico, and NASA scientists have studied the methane cloud as a potent climate changer for the past three years.

When it first appeared, scientists questioned its existence.

“We couldn’t be sure that the signal was real,” NASA researcher Christian Frankenberg told the Washington Post.

But NASA teams and University of Michigan scientists verified the methane “hot spot” in October. The study’s lead author Eric Kort says it’s unlikely that the methane emissions were caused by fracking alone, as the period in which scientists have studied the cloud predates “the widespread use of hydraulic fracturing.” Kort says the methane emissions are likely due instead to leaks in natural gas extraction and processing equipment in New Mexico's San Juan Basin.

"The results are indicative that emissions from established fossil fuel harvesting techniques are greater than inventoried," Kort said. "There's been so much attention on high-volume hydraulic fracturing, but we need to consider the industry as a whole."

Although not detectable by the naked eye, the cloud is visible from outer space. NASA scientists estimate the plume has reached over 2,500 square miles in the past decade.

It’s only the latest episode of documented massive gas leaks, and infrared cameras are currently being used to detect the natural gas surfacing from wells and compressors across the country.

Methane is considered to be twenty times more harmful a greenhouse gas than carbon-dioxide. With the advent of fossil fuel drilling operations, the cloud was likely formed from years  of leaked natural gas, according to the study.

When oil and gas are taken from the ground, methane escapes into the atmosphere, and environmentalists have long charged that the controversial process of burning the excess methane during oil and gas drilling has a detrimental effect on global warming.

NASA says the New Mexico cloud alone represents about 6,000 metric tons of wasted methane annually and this latest report is described by scientists as a $2 billion leak problem. Oil and gas producers lose a total of around 8 million metric tons of methane a year across the U.S., according to the Washington Post.

While methane emissions are commonly cited as potential danger, Congressional action to curtail emissions has been often stalled, with many conservative lawmakers calling such policies intrusive.

The discovery of this gas cloud is expected to prompt swift action from the Obama administration, which is set to announce measures to shrink it next month.