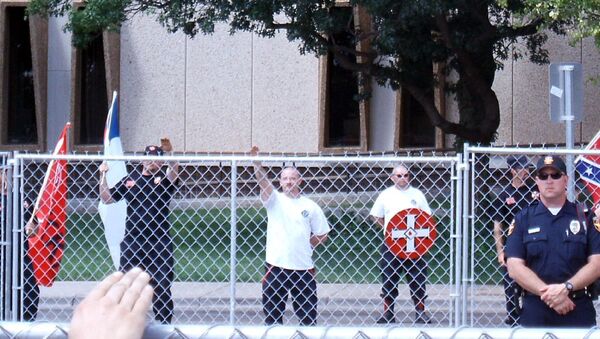 In a bizarre alliance, the Ku Klux Klan and American Civil Liberties Union teamed up to take a small Missouri town to court over First Amendment rights. On Wednesday, the 8th Circuit ruled in favor of the town.

Desloge, Missouri, 60 miles southwest of St. Louis, passed an ordinance that forbid pedestrians from entering the street to distribute flyers. This did not bode well for the Traditionalist American Knights of the Ku Klux Klan.

The group uses public streets to hand out leaflets to warn against the effects of methamphetamine on the white race, and to inform the public about what it perceives to be the encroaching danger of Shariah Law.

If a driver expresses interest, Klan members fling themselves into the road to give them a flyer, often while wearing robes and hoods which can severely hinder their vision.

While a federal judge in St. Louis initially sided with the Klan on the grounds that Desloge’s ban did not properly consider public-safety interests, the 8th Circuit determined that pedestrian solicitation could be hazard to drivers.

The fact that no injuries have occurred to date matters little to Judge Diana Murphy, who wrote, “government need not wait for accidents to justify safety regulations.”

The case mirrors a similar one from 2012, when the ACLU also defended the KKK’s right to place handbills on car windshields in Cape Girardeau, Missouri.

In a statement about that case, executive director of the ACLU-EM, Brenda L. Jones, said, “Defending the rights of groups that the government tries to censor because of their viewpoints is at the heart of what the First Amendment and the ACLU stand for, even when the viewpoints are not popular.”

The decision also follows similar complaints from an Indiana town. Residents of Farmland complained of the same KKK group leaving leaflets in their driveways.

“It was pretty much all over town,” one resident said. “They were everywhere.”

According to Farmland town marshal, “[Residents] were upset that propaganda was delivered to their property. But it’s freedom of speech protected under the First Amendment.”