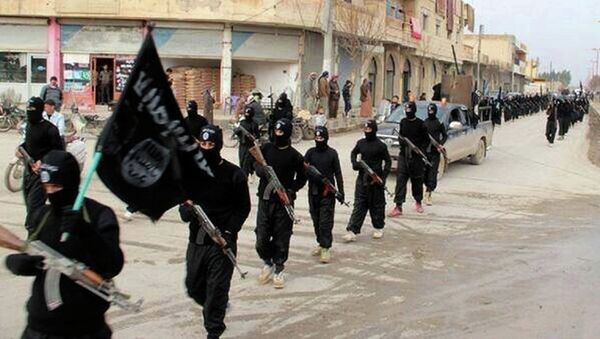 The number of young people attracted by Islamic State's fraudulent online propaganda is growing steadily. Almost 150,000 people have fled their homes to territories controlled by the Islamic State.

"The influence of online extremist preachers is clearly playing a massive role in Islamic State recruitment. In many cases online extremists are obviously overwhelming whatever calming influences are offered by local Islamic leaders and even parents," the Daily Telegraph Australia reported.

While young Muslim men are attracted by the idea of martyrdom and eternal paradise, women and even whole families joining the Islamic State are apparently dreaming of a "utopian" society, based on justice and Islamic morality.

"These families believe they are doing the right thing for their children. They think they are taking them to a kind of utopia," said Melanie Smith from the London-based King’s College International Center for the Study of Radicalization, as quoted by the Washington Post.

"The more they [ISIL jihadists] are successful at creating a whole new society, the more they are able to attract entire families. It's almost like the American dream, but the Islamic State's version of it," emphasized Mia Bloom, a professor of security studies at the University of Massachusetts at Lowell, as cited by the media outlet.

Remarkably, even those who are relatively prosperous and well-integrated into Western society, are leaving their homes for Syria and Iraq. The Daily Mail reports that Sharky Jama, a "budding" model, has given up his successful career and fled for Fallujah, Iraq, an ISIL stronghold.

"That is pretty much a very typical profile, young men who for all intents and purposes seem to be quite well integrated… but then there's something that turns them," Dr. Anne Aly, a counter-terrorism researcher at the Curtin University, told Daily Mail Australia.

Indian Executive Used Twitter to Support Islamic State
According to some analysts, almost 15,000 people including citizens of developed countries have already left for the territories controlled by the Islamic State enchanted with the ISIL media propaganda. Along with brutal and horrific "beheading" videos "the Islamic State "uses family imagery in its aggressive and highly polished online recruiting on social media," the Washington Post underscores.

The participation of women is especially "distressing," the Daily Telegraph Australia stresses, adding that some Australian women flee to the terrorist state in order to marry jihadi fighters there.

"She's been brainwashed, she wasn't like this three or four months ago," said the father of Zehra Duman, a young Melbourne woman who recently travelled to Syria.

"The other jihadi groups promise you all these wonderful things in the afterlife. The Islamic State promises to give you stuff in the current life and the afterlife, so you don’t have to wait to enjoy all your rewards," Mia Bloom pointed out.

However, many of those who seek new life in the Islamic State are faced with an awkward reality on the ground. Some of them have been already killed in a "holy war," others are desperately trying to return home. Meanwhile, the Islamic State's online propaganda is attracting new victims, promising them a new life and better prospects.