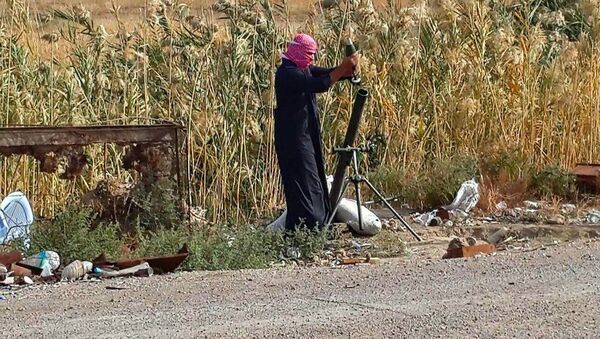 © East News / AP
Subscribe
A successful Australian male model has abandoned his "budding" career in order to join the Islamic State fighters in Iraq. Although his current role in Fallujah, an ISIL stronghold, is unknown, it is obviously "very different to his Australian occupation," the Daily Mail Australia notes.

Teenage IS Recruit Volunteers as Suicide Bomber to Escape Islamic State
MOSCOW, December 29 (Sputnik), Ekaterina Blinova – A Melbourne male model has given up a promising career to join the Islamic State fighters in Iraq.

"Sharky Jama, from Melbourne, has traded in a 'budding' modelling career for a life devoted to the Islamic State in the Middle East," the Daily Mail Australia reported.

According to the Australian Jama, of Somalian descent, and his friend Yusuf Yusuf, a former La Trobe University student, have fled to the Islamic State's strongholds in Fallujah, Iraq, and Raqqa, Syria.

"Mr Jama's former social media accounts — including one with the username "thelastkhliafat," a misspelled reference to an Islamic caliphate — have been deleted, but he maintains a Facebook page under a different name in which he offers his perspectives on Islamic State and life under its banners," the media outlet elaborates.

"That is pretty much a very typical profile, young men who for all intents and purposes seem to be quite well integrated… but then there's something that turns them," Dr. Anne Aly, a counter-terrorism expert from Curtin University, told Daily Mail Australia.

"It might take a year, it might take six months and if they continue down that path and become more and more radicalized they get to the point where they're ready to take action," she added.

According to the government officials, more than 70 Australians have joined the Islamic State insurgents in Syria and Iraq, while the passports of another 100 would-be fighters have been cancelled.

While some of them are believed to be ISIL insurgents, others are working for the Islamic State's propaganda machine. A man from the western Sydney is working as a video editor, the Australian reveals. Another two Australians have appeared in the recruitment videos encouraging youths to join "the holy war."

The Daily Mail Australia notes that although Jama's role in Fallujah is still unknown, it is obviously "very different to his Australian occupation."