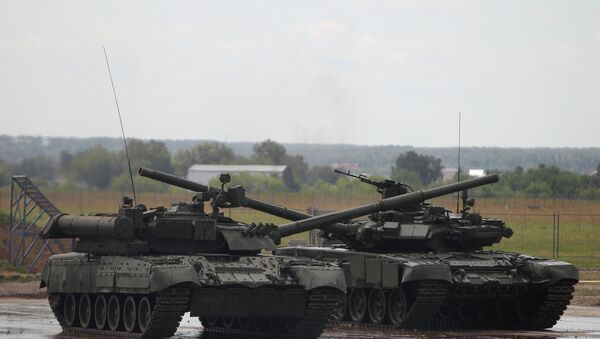 © Sputnik / Valery Melnikov
/
Go to the mediabank
Subscribe
International
India
Africa
Deputy Chairman of the Russian Military-Industrial Commission said that Russia's next-generation Armata main battle tank, which due to be shown to the public at the 2015 Victory Day parade in Moscow, will undergo state testing in 2016.

MOSCOW, December 30 (Sputnik) — Russia's next-generation Armata main battle tank, which due to be shown to the public at the 2015 Victory Day parade in Moscow, will undergo state testing in 2016, the Deputy Chairman of the Russian Military-Industrial Commission said.

"There has been no state testing yet, it is scheduled to begin in 2016," Oleg Bochkaryov told Russia's Ekho Moskvy (Echo of Moscow) radio on Monday.

Bochkaryov specified that after taking part in the May 9, 2015 Victory Day military parade, commemorating 70 years since the defeat of the Nazi Germany, several dozens of Armata machines will be tested in the army.

"Receiving information [from the army tests], we will be preparing for state tests, which will last until the end of 2016," the defense official said.

The Armata is designed as a modular universal combat platform that could be used as a basis for a variety of combat vehicles, including main battle tanks, fire support, mine clearing, heavy flame throwing and bridge laying vehicles, according to Russian state-run arms exporter Rosoboronexport.

The Armata tank will reportedly feature a remotely controlled gun and fully automated loading, as well as a separate crew compartment made from composite materials and protected by multilayered armor.

Russian Ground Forces are planning to renew some 70 percent of their hardware by 2020.