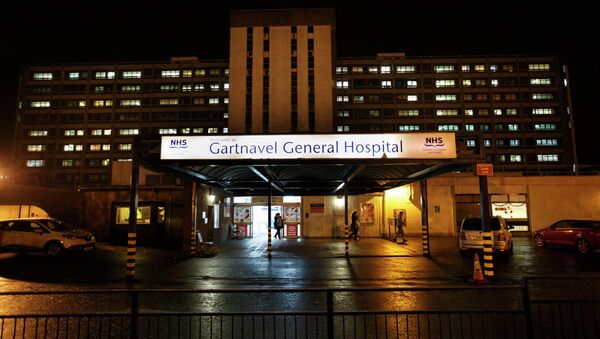 A patient is being treated for Ebola at Glasgow's Gartnavel Hospital, the Scottish government said in a statement published on its website.

MOSCOW, December 29 (Sputnik) — Scottish authorities confirmed on Monday that a patient is being treated for Ebola at Glasgow's Gartnavel Hospital.

“A confirmed case of Ebola has been diagnosed in Glasgow. The patient is a health care worker who was helping to combat the disease in West Africa,” the Scottish government said in a statement published on its website.

The patient, reportedly a woman, returned to Scotland from Sierra Leone late Sunday, having traveled via Casablanca and the London Heathrow Airport, and was admitted to an isolation unit at the Gartnavel Hospital early Monday morning.

Number of Ebola Cases in West Africa Exceeds 20,000: WHO

All possible contacts with the Ebola patient are being investigated and those at risk of infection will be contacted and monitored, the Scottish government said, stressing, however, that as the patient had been diagnosed “in the very early stages of the illness, the risk to others is considered extremely low.”

“Scotland has been preparing for this possibility from the beginning of the outbreak in West Africa and I am confident that we are well prepared,” Scottish First Minister Nicola Sturgeon was cited as saying on the government’s website.

Despite the risk of infection being “negligible”, a telephone hotline has been set up for anyone who was on last night’s flight from London to Glasgow.

The current Ebola epidemic broke out in West Africa in late 2013 and has claimed the lives of more than 7,800 people, with more than 19,500 cases of infection being registered. Several foreign healthcare workers who have traveled to the Ebola-stricken countries have been infected by the deadly virus.