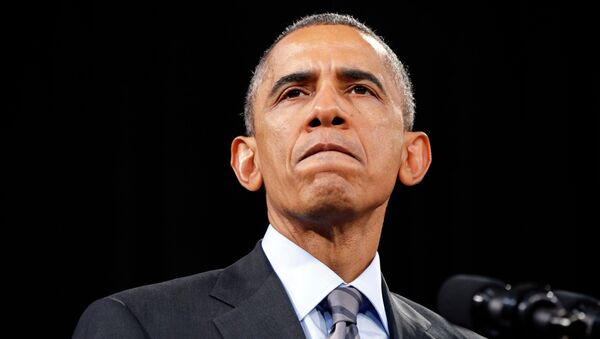 © REUTERS / Kevin Lamarque
Subscribe
US President said that the racial issues in the United States are not new, though long-existing problems resurfaced after killings of African American men by white police officers.

WASHINGTON, December 29 (Sputnik) — Long-existing problems resurfaced after killings of African American men by white police officers, but the racial issues in the United States are not new, US President Barack Obama said Monday.

“The issue of police and communities of colour being mistrustful of each other is hardly new; that dates back a long time. It is just something that has not been talked about,” Obama said in a National Public Radio interview.

Obama added that it was understandable that the polls might show race relations have worsened in the American society, as media coverage of the two recent cases in Ferguson and New York attracted much attention.

However, President Obama said he believed that the issue of race surfaced in a “healthy” way and would lead to the resolution of the problem.

“I assure you, from the perspective of African Americans or Latinos in poor communities who have been dealing with this all their lives, they would not suggest somehow that it is worse now than it was 10, 15 or 20 years ago,” he said.

The United States has seen a wave of protests calling for police accountability and racial justice since summer, after two African American men, Eric Garner and Michael Brown, died in New York and Ferguson at the hands of white policemen.

According to a poll conducted by American research company Gullup in December, 13 percent of Americans named "race relations" or "racism" as the most important problem in the United States. It is the highest figure Gallup has recorded since a finding of 15 percent in 1992.