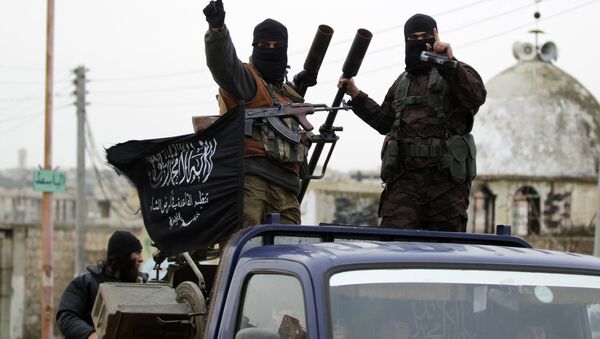 Online magazine gives instructions to would-be jihadists on how to plan and carry out terrorist attacks.

Al-Qaeda Threatens Attacks on French Oil Giant Facilities in Yemen
MOSCOW, December 29 (Sputnik) – An article published in the jihadi magazine Inspire on Christmas Eve calls on lone jihadis to launch attacks on airlines, and gives instructions on how to make bombs and get through security checks.

The US magazine Homeland Security Today reported on Christmas Day that the latest issue of the magazine contained a lead story entitled, "Destination airport, and Guess What’s on the Menu?" and was released on Christmas Eve, the fifth anniversary of the bombing attempt by Umar Farouk Abdul Mutallab on Christmas Day 2009 while onboard Northwest Airlines Flight 253.

Air companies picked out as targets for attack are US carriers American Airlines, United, Delta, and Continental, while British carriers British Airways and Easyjet are also listed, as well as Air France. Delta is described as "the target of our brother, 'Umar Al-Farouq 'Abdul Muttalib – may Allah hasten his release."

A blog from the Anti-Defamation League reports that the article suggests an order of precedence for attacks: "the first priority and the main focus should be on America, then the United Kingdom, then France… This goes on with the NATO coun¬tries as per the known order.”

Pakistan Arrests Five Suspected Al-Qaeda Members in Karachi
The issue, called "Neurotmesis: Cutting the Nerves and Isolating the Head," also names high profile figures in the economic sphere as prospective bomb targets, including former Federal Reserve Chairman Ben Bernanke, and Bill Gates. Bernanke was described in the magazine as the current Reserve chairman, despite having left the post in February.

Along with suggestions for targets, the magazine includes guidance for making bombs in the kitchen, the Independent reports, and makes a special call for "lone mujahideen" to carry out bombings. "Lone Jihad against the West, especially when intensified, will create a state of terror, anxiety, public resentment and complaint against the governments and policies that brought about lone Jihad," an interviewee called "AQ-Chef" explained in a Q&A featured in the magazine.

The December 2014 edition is the publication's thirteenth, having been first published online in 2010 by al-Qaeda in the Arabian Peninsula member Samir Zafar Khan, who was killed in a US drone strike in 2011 along with fellow alleged terrorist Anwar al-Awlaki. The first issue shot to notoriety after it published a guide to explosives named "Make a Bomb in the Kitchen of Your Mom," said to have served as a bomb-making template for the terrorists who killed three and injured 260 at the Boston Marathon in April 2013.