Ayatollah Khamenei Tweets Blast the US 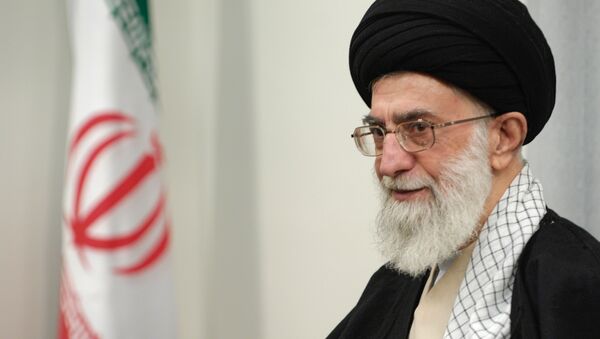 Iran's Supreme Leader writes tweets referring to Ferguson and the massacre at Wounded Knee in order to blast the US for hypocrisy.

MOSCOW, December 29 (Sputnik) – Iran's Supreme Leader has taken to twitter to make a series of tweets condemning the US, citing hashtags including #Ferguson, #BlackLivesMatter and #Jesus to draw attention to the West's shortcomings.

"#Jesus endured sufferings to oppose tyrants who had put humans in hell in this world& the hereafter while he backed the oppressed. #Ferguson," the cleric wrote on Sunday, followed by another post which referenced the "arrogants," "the oppressed," and the hashtag #BlackLivesMatter.

It's expected that followers of #Jesus follow him in his fight against arrogants and in his support for the oppressed. #BlackLivesMatter

As well as seeking to draw attention to the gap between Jesus' example and the actions of authorities in the US, the Ayatollah also listed crimes carried out by the US against Iran, and expressed condemnation of the US's support for Israel, using the hashtag #KillerIsrael.

Today,arrogants claim to follow #Jesus but they took the place of tyrants against whom Jesus spent his life to fight. #KillerIsrael 12/27/00

Sunday's posts were followed on Monday by references to the slave trade carried out by US colonialists, and the massacre of Native Americans at Wounded Knee, using the tags  #NativeLivesMatter and #WoundedKnee.

Look at the arrogants’ crimes against #NativeAmericans! It is one of the dark points in the history of modern America. #WoundedKneeMassacre

Was it not colonialists who killed Native Americans& enslaved millions of Africans?Are these American values? #Ferguson #WoundedKnee 3/18/02

The Ayatollah's English language account has been active since March 2009 and has released 6,500 tweets, with over 91,000 followers, dwarfing the 15,500 followers of his account in Farsi. In August, the cleric began to express his concern about events in Ferguson, tweeting "Today like previous years, African-Americans are still under pressure, oppressed and subjected to discrimination," and citing violations of human rights by the US government.

Last month the account also attracted attention after Khomeini released tweets declaring that the US should "feel the sweat of shame" on the commemoration of Human Rights Day, and in the wake of the US Senate Intelligence report into CIA torture.