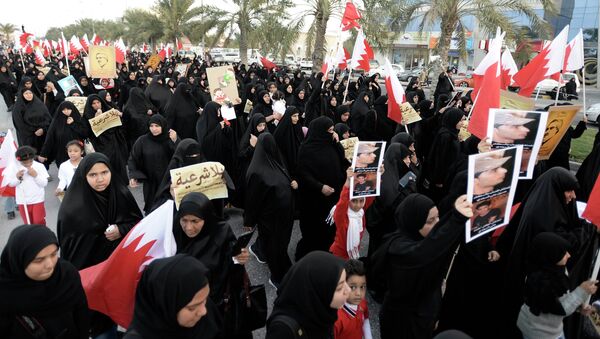 "Deprivation of liberty on the sole ground of having exercised the right to free expression may be considered arbitrary. … All three activists have been detained or sentenced purely for their criticism of government authorities," Mads Andenas and three other experts from the Special Procedures of the Human Rights Council, a UN body of independent experts, said in the statement.

The activists named are Maryam Al-Khawaja, the co-director of the Gulf Center for Human Rights, her sister Zainab Al-Khawaja, and Ghada Jamsheer, the head of the Women's Petition Committee.

Bahrain Supreme Court Upholds Case Against Prominent Political Activist
According to the UN experts, the Al-Khawaja sisters, the daughters of the Bahrain Center for Human Rights' former president, were respectively charged on December 1 and 4 with allegedly attacking airport security personnel and tearing up a picture of Bahrain's king in court in October.

The third woman, Ghada Jamsheer, who has been fighting for a revision of Bahrain's family laws, was in detention since mid-September for three months for her "defamatory tweets." She has been under house arrest since mid-December and is facing 12 charges, assaulting a police officer among them.

"We urge the authorities to turn away from such persecution and immediately drop all the charges against the Al-Khawaja sisters and Ms. Jamsheer," they added.

The human rights experts concluded by saying that they had formerly expressed concern with the Bahraini government over the way it treats human rights activists.