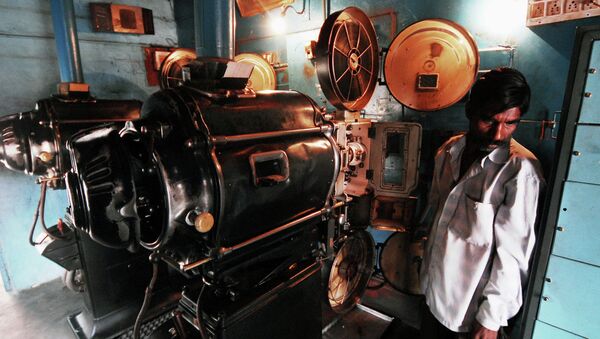 Protests continued across Western and Central India on Monday over the controversial but commercially successful Bollywood comedy-drama film PK.

MOSCOW, December 29 (Sputnik) - Offended Hindus and Indian nationalists took to the streets in cities including Ahmedabad, Bhopal, Allahabad and Lucknow to denounce a new comedy-drama, PK, for its allegedly irreverent depiction of Hinduism, carrying signs, setting copies of the poster for the film on fire, and vandalizing cinema halls and signboards outside theaters.

The All-India Hindu Assembly, a nationalist party, stated that the film's depiction of Hindu rituals and deities, including Lord Shiva, are "an insult to Sanatana Dharma" (Orthodox Hinduism), the Deccan Chronicle noted. The group also alleged that the provocations were deliberate, "so their film is a hit and they [could] earn more money," ABP News noted.

Yoga guru, televangelist and spiritual leader Baba Ramdev called for a "social boycott" of the movie on Monday, saying that it denigrated Hinduism and Hindu culture, and that those associated with its production should be "ostracized," the Deccan Chronicle noted.

The movie, which has grossed over $28 million since its December 19 release, features a space-traveling alien who lands in India and observes its peoples' religious traditions. The film's director, Rajkumar Hirani, defended the film last week. He explained that children are "taught to follow certain rules and act according to one's religious traditions," and to "have their own set ideology," thinking "their ways or methods are right and others are wrong." Hirani explained what appears to be the absurdity of the differences between the sacred and the profane among various religious groups, the Times of India explained.

The love for #PK has transcended all boundaries. Here's what critics worldwide have to say about the movie! #PKAaya pic.twitter.com/bVuAdUjJOs

Fears of Hindu-Muslim Tensions Brought About by the Film

Aamir Khan, the film's star, has been at the center of the controversy, in part because he is a Muslim. Baba Ramdev noted that while "people think a hundred times while talking against Islam…when it comes to Hinduism anyone gets up and says anything, [and] this is shameful," the Times of India reported. Khan denied the insinuation that he had intended to denigrate Hinduism, noting that "we respect all religions," and that his Hindu friends saw and enjoyed it, the Hindustan Times explained.

Khalid Rashid Mahali, a spokesperson for the All-India Muslim Personal Law Board, called on India's Censor Board of Film Certification to remove the offensive scenes from the movie so that "religious sentiments" are not hurt and "so that communal harmony is not disturbed," the Times of India noted.

The Censor Board denied the requests to remove scenes from the movie on Sunday. Leela Samson, the Board's chairwoman, stated that "every film may hurt [the] religious sentiments of somebody or the other. We can't remove scenes unnecessarily because there is something called creative endeavor where people present things in their own way. We have given a certificate to PK and we can't remove [it] now because it is already out for public viewing," according to the Deccan Chronicle.

Earlier this year, India's Supreme Court dismissed a public interest litigation motion which sought to ban the film's poster, which features a nearly-naked Khan holding a transistor radio, for obscenity.

Another public interest litigation case is set to be heard on January 5; this time, a court will determine whether or not it should ban the screening of the film and the removal of its certification, The Hindu explained.