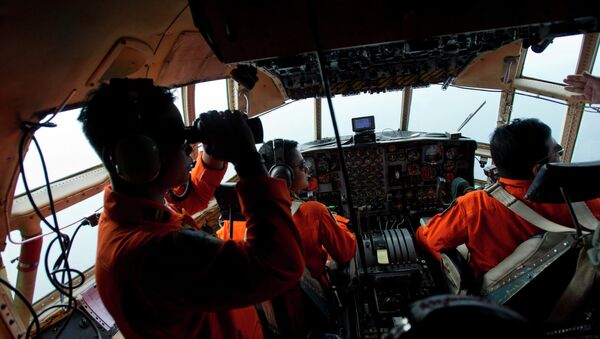 © REUTERS / Wahyu Putro/Antara Foto
Subscribe
International
India
Africa
"Suspicious" objects were seen about 1,120km from where the plane last made contact, but it is now clear they are not from the missing jet.

Air Force Marshal Agus Dwi Putranto was cited by Indonesian news website DetikCom as saying that the Orion found an object or several objects in the vicinity of the Airbus's disappearance, but has not yet identified what the objects were. Several Air Force planes are heading toward the location of the unidentified object to assist in the investigation.

Following the press conference with the Indonesian vice president, Jusuf Kalla, it is now clear that the debris spotted by an Australian search plane does not belong to the missing AirAsia jet.

“It has been checked and no sufficient evidence was found to confirm what was reported.” Kalla said there were 15 ships and 30 aircraft searching the area. “It is not an easy operation in the sea, especially in bad weather like this,” he said.

#BREAKING: Object spotted in sea was not from AirAsia plane: Indonesian VP

Indonesia's National Search and Rescue Agency (Basarnas) reported earlier that it was verifying reports from inhabitants of the Bangka-Belitung Islands about an explosion heard in the vicinity of where the plane disappeared. Local authorities have sent 11 boats to the area.

Henry Bambang Sulistyo, the head of Basarnas, assumed that the plane sank. According to the rescuers, the depth of the wreckage is about 40 meters (131 feet).

The missing AirAsia Airbus A320-200, flying to Singapore from Surabaya, Indonesia with 162 people on board, lost connection with air traffic control on Sunday morning.