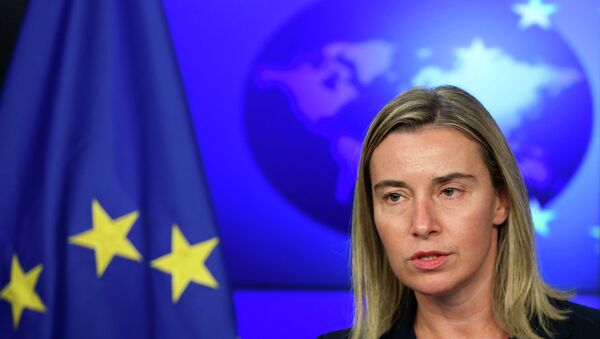 Federica Mogherini stated Sunday that the West wants to stop confrontation with Russia over Ukrainian crisis.

“I often speak to [US Secretary of State John] Kerry and there is complete unity in views on the Ukrainian crisis, and similar views exist in other countries, from Canada to Japan. And everyone wants to end the logic of confrontation, the wall to wall,” Mogherini said in an interview with the Italian La Repubblica newspaper.

Ukraine Crisis - Biggest Challenge for European Security
According to the European Union's foreign policy chief, the current situation is very difficult for Russia and it is in Moscow’s interests to help end the Ukrainian conflict. Meanwhile, the West must “begin direct discussions with Moscow over our mutual relations and the role Russia can play in other crises”.

“Russia has an important role not only in Ukraine, but also in Syria, Iran, the Middle East, Libya,” she told the newspaper.

Relations between Russia and the West have been strained in recent months as the European Union, the United States and a number of their allies have introduced several rounds of sanctions against Moscow over its alleged meddling in the Ukrainian crisis.

54% of Germans Say Anti-Russian Sanctions Aggravate Ukrainian Crisis: Poll
Russia has repeatedly denied any involvement in Ukraine’s internal affairs and called on Kiev to engage in talks with the breakaway regions in the country’s southeast to find a peaceful solution to the conflict.

On Saturday, the Russian Foreign Ministry released a statement, saying that despite the complexity of the current situation, relations with the European Union will be one of Russia’s top priorities in the upcoming years. Relations with the United States can also be restored if Washington shows readiness to engage in dialogue with Moscow on the basis of respect and equality, the ministry said.