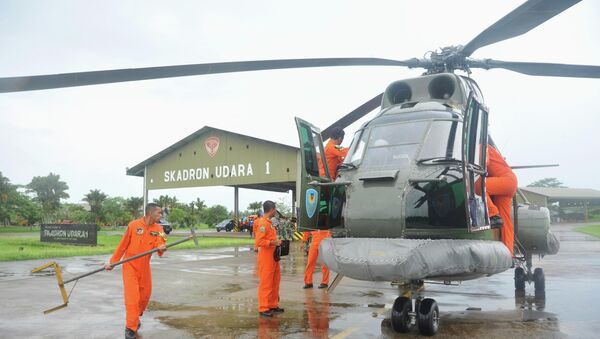 © REUTERS / Jessica Helena Wuysang
Subscribe
Rescue teams searching for the missing AirAsia plane with 162 people on board stopped the search as darkness fell on Sunday night, but Indonesia's transport ministry said the search operation would resume on Monday morning.

Indonesia Verifies Reports on AirAsia Plane's Emergency Landing
MOSCOW, December 28 (Sputnik) – Rescuers searching for the missing AirAsia plane with 162 people on board halted their search as the night settled in, according to Indonesia’s transport ministry, Reuters reports.

“We ended at 5:30 p.m. (10:30 a.m. GMT) because it was getting dark. The weather was also not too good as it was getting really cloudy,” transport ministry official Hadi Mustofa said, as quoted by AFP. “Tomorrow we will begin at 7 am, or even earlier than that if the weather is good,” he further said.

Earlier on today, it was reported that the plane Airbus A320-200 operated by AirAsia company, heading from Surabaya, Indonesia to Singapore, disappeared from the radars.

According to the statement issued by AirAsia, air traffic control lost contact with flight QZ8501 at 07:24 local time (00:24 GMT). The aircraft carried 155 passengers and seven crew members on board. Most passengers on board were Indonesian; three passengers were South Koreans, and one French, Malaysian and Singaporean.

AirAsia Group CEO Anthony Fernandes said Sunday on Twitter that the disappearance of flight QZ8501 was his "worse nightmare."