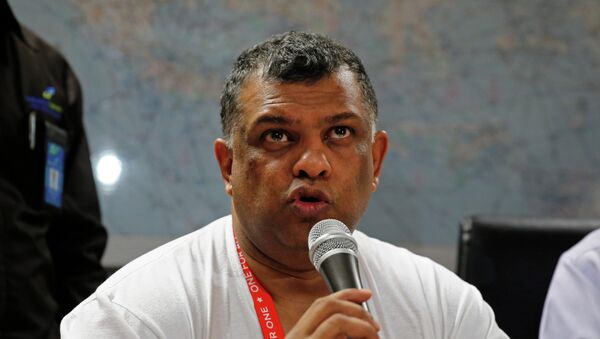 © REUTERS / Beawiharta
Subscribe
The CEO of AirAsia Group, Anthony Fernandes, is touched by the massive show of support as Airbus A320-200 operated by AirAsia en route from Surabaya in Indonesia to Singapore with 162 people on board disappeared from the radars Sunday morning.

Airbus A320-200 operated by AirAsia en route from Surabaya in Indonesia to Singapore disappeared from the radars Sunday morning. The destiny of the 162 people on board is yet unknown.

To all my staff Airasia all stars be strong, continue to be the best. Pray hard. Continue to do your best for all our guests. See u all soon

On my way to Surabaya where most of the passangers are from as with my Indonesian management. Providing information as we get it.

AirAsia Plane With 162 Aboard Feared Crashed Into Water Due to Turbulence
"I am touched by the massive show of support especially from my fellow airlines. This is my worse nightmare. But there is no stopping," Fernandes said, adding that AirAsia's priority now is to take care of the crew's and passengers' relatives.

Earlier in the day, Fernandes said he was on his way to Surabaya, where most of the passenger were from, and promised to provide new information as soon as his management has it.

According to the Indonesian National Search and Rescue Agency (Basarnas), the plane was caught in turbulence, asked permission to deviate from the initial course and crashed into the sea. AirAsia also issued a statement confirming the crash. Nevertheless, the Indonesian Ministry of Transportation said it was too early to make any conclusions.