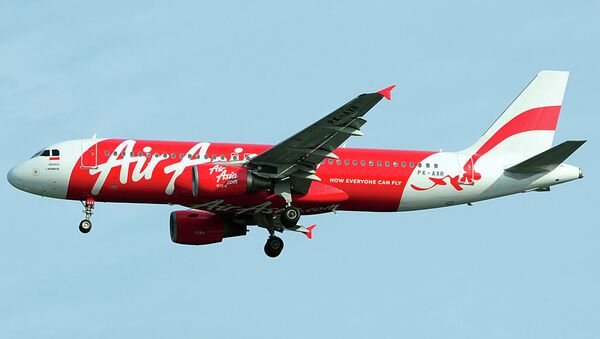 Air traffic control lost contact with flight QZ8501 at 07:24 local time (00:24 GMT). The cause of the crash is thought to have been severe turbulence, according to the Indonesian National Search and Rescue Agency.

Indonesian Ministry Not Ready to Confirm AirAsia Plane's Crash
JAKARTA, December 28 (Sputnik) — AirAsia flight QZ 8501 crashed of the coast of Indonesia, with the cause thought to have been severe turbulence, the Indonesian National Search and Rescue Agency said Sunday.

However, the Indonesian Ministry of Transportation is not ready to confirm information about the crash AirAsia's aircraft, the ministry's Air Transport Director Djoko Murjatmodjo said Sunday. The ministry is currently verifying information claiming that the missing AirAsia aircraft has made an emergency landing in the eastern part of the Belitung island in the Java Sea.

Search, Rescue Operations Launched for Indonesia-Singapore Flight: AirAsia
The AirAsia plane disappeared about two hours into a three-hour flight, BBC said. According to the statement issued by AirAsia, air traffic control lost contact with flight QZ8501 at 07:24 local time (00:24 GMT). There were 155 passengers on board, including 17 children, two pilots and five cabin crew. Most passengers on board were Indonesian; three passengers were South Koreans, and one French, Malaysian and Singaporean.

Flight QZ 8501 was operated by Airbus A320. Currently, there are 3,606 A320s in operation worldwide, AP said. The jet has a very good safety record, with just 0.14 accidents per a million takeoffs, according to a safety study conducted by Boeing earlier this year.

Earlier this year, Malaysia Airlines flight MH370 disappeared during a flight from Kuala Lumpur to Beijing in March with all 239 passengers and crew on board. The plane’s wreckage point has still not been located.