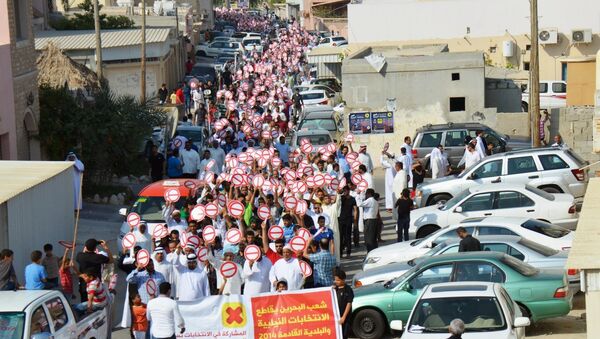 The rally under the motto "Democracy is Our Right", ran its course, despite that two years ago the government prohibited opposition parties from rallying their supporters and threatened them with violence, Al-Wefaq said.

It stressed that the people of Bahrain, who are largely Shiites while the ruling Al-Khalifa dynasty is Sunni, "refuse to be marginalized and demand to be truly represented through truly elected government".

Bahrain Sentences Human Rights Activist Maryam Khawaja to One Year in Jail
This referred to the runoff parliamentary elections, held in the country on November 29 that the opposition boycotted as a scam vote. Demonstrators have been calling for the royal family to relinquish power and allow for a new democratic government to be elected.

The Bahraini government has been at odds with the Shiite-majority population since a wave of "Arab Spring" uprisings spread from Tunisia to Egypt, Bahrain and elsewhere across the Middle East in 2011.

Bahraini police have been accused by Human Rights Watch and other pressure groups of brutally clamping down on demonstrators, with the government in Manama using harsh counterterrorism laws to prosecute human rights defenders. The opposition has also accused authorities of abducting and torturing political prisoners.