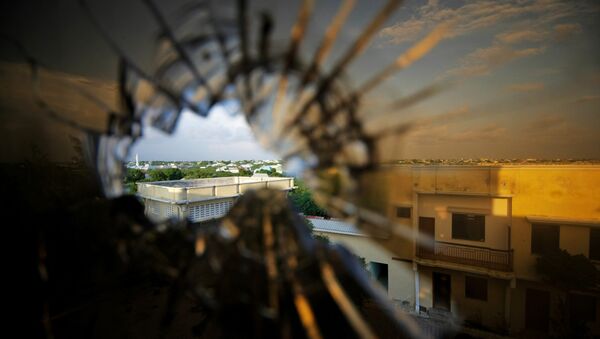 UN Secretary-General Ban Ki-moon conveys his sincere condolences to the families of the peacekeepers killed in the al-Shabab's attack on Thursday. He reaffirms the UN support to Somalia.

Nine Killed in Al-Shabab Attack on African Union Base in Somalia
UNITED NATIONS, December 26 (Sputnik) – UN Secretary-General Ban Ki-moon has condemned the attack of al-Shabab militant group on peacekeepers' base in Somalia on Thursday and reaffirmed the UN support to the country Friday.

"The Secretary-General strongly condemns yesterday's attack on the African Union Mission in Somalia (AMISOM) base camp in the Mogadishu International Airport… The Secretary-General conveys his sincere condolences to the families and friends of those who have lost their lives, and wishes a swift recovery for the injured," a statement published on the UN website read.

Ban Ki-moon added that the UN will further "support the Government and people of Somalia in their continuing journey toward peace and stability".

Four Killed in Attack on African Union's Peacekeepers Base in Somalia
On Thursday, al-Shabab militant group attacked the base of the African Union Mission in Somalia (AMISOM) in Mogadishu, reportedly targeting the Christmas party there. Three AMISOM soldiers and a civilian contractor were killed, according to the mission's statement released on Thursday.

AMISOM is a peacekeeping mission of the African Union that helps establish security in Somalia and assists the country's government in conducting operations against al-Shabab.

Al-Shabab is an Islamic fundamentalist group linked with al-Qaeda that intends to create an Islamic state in Somalia. The group persecutes non-Muslims, advocates strict interpretation of sharia law and attempts to eliminate western influence in the region. It is believed to be behind most of the terrorist attacks in the country.