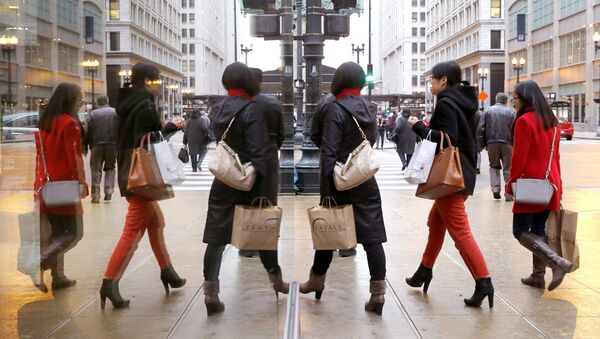 MOSCOW, December 26 (Sputnik) – The annual Boxing Day pilgrimage hits stores around the world, with Christmas shoppers expected to spend billions of dollars on their retail therapy.

As retailers in Britain opened their doors this morning, huge crowds of shoppers had already been waiting to get in and make the most out of sales. Shoppers at Selfridges in London’s West End had a good start.

I am in the queue for the Next Sale # can you see me? pic.twitter.com/5TsoWlEy3S

“We anticipate it will be another record-breaking day for us. In the first hour across all of our stores we anticipate we will take probably around £2 million ($3.1 million), which is up on last year,” said Meave Wall, Selfridges store director, as quoted by the Daily Mail.

While some queued in front of retail shops from midnight, others shopped online. British online shoppers are expected to make more than 160 million visits to shopping websites and spend as much as $748 million today, The Independent said.

Retailers in Australia expect that shoppers will spend more than $2 billion on Boxing Day alone and as much as $16 billion during a three-week long Post-Christmas shopping binge, ABC News reported.

Shoppers across Australia are predicted to splash nearly $2.1 billion at the Boxing Day sales. http://t.co/HKN989jyiB

Later in a day, American and Canadian shoppers will also flock to stores. West Edmonton Mall, North America’s largest shopping center, is getting ready to face the Boxing Day shoppers.

“I’m very, very excited. We have items more than 80% off right now,” said Hameed Jan, one of the stores’ manager at West Edmonton Mall, quoted by Edmonton Journal.

Boxing Day is celebrated the day after Christmas Day. Traditionally, people would receive gifts in a “Christmas box” from their bosses and employers. Today, the holiday is mostly celebrated in the United Kingdom, Australia, Canada and many former British territories. On Boxing Day many stores have dramatic price reductions.